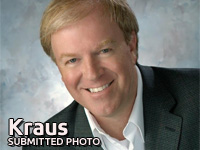 UTICA-ROME -- For thirty years, he was known as "The Doctor" in afternoon drive on WOUR.  That ended in 2007, when Clear Channel eliminated most of WOUR's staff just before the company sold its cluster to current owner Galaxy Communications.  Today, locally-owned Arjuna Broadcasting announced Kraus is returning to 92.7 The Drive (WXUR).

Starting on June 24, Kraus will host a three-hour Sunday morning program called "The Time Warp," the station announced today.  The show will air from 9am to noon.

In a press release, Kraus said the show will combine a variety of classic rock favorites, along with "some nuggets listeners seldom get to hear" on the radio.  Kraus also promises to offer "fun features, flashbacks and special guests dropping in to help pick out music and help make the show a great way to start a Sunday off."

Program Director Tom Starr says "When will Jerry be back on the radio?" is the most-frequent question he's heard from listeners, and today, Starr says "It's great to be able to answer" that question. "I look forward to working with Jerry again," Starr added.

Owner and GM Mindy Barstein said, "the entire staff is thrilled to welcome Jerry to our team and continue highlighting the Utica/Rome market. We have the premiere radio line up in the market and are working hard to keep our events and promotions local."

Since his exit from Clear Channel, Kraus joined the Stevens-Swan Humane Society in early 2008, as the organization's PR and Marketing Director.  He'll continue to serve in that position during the week.  During his time away from radio, Kraus also tried his hand at politics -- in 2009, he was elected to the City of Utica Common Council.  His two-year term expired at the end of 2011.