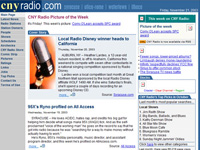 CNYRadio.com launched on March 1, 2001. Created by Scott Jameson, a computer programmer and Syracuse radio personality, the original site featured news, station listings, schedules, a "Picture of the Week" and even a weekly comic strip drawn by Scott himself.

At first, CNYRadio.com focused exclusively on Syracuse radio market, but later grew to include the surrounding markets: Utica-Rome, Watertown and Ithaca/Cortland. In 2005, Scott decided to put the site on hiatus.

At least one reader of the original site wanted to see it come back. In late 2007, Peter Naughton, a former radio programmer and TV news producer with some web design experience of his own, contacted Scott about reviving the site. Scott graciously "transferred the license," so to speak, and Peter started developing the new CNYRadio.com.

The current iteration of CNYRadio.com launched in February 2008.  Naughton continued to cover radio in the same four markets as the original site, along with the "Picture of the Week" series. At some point along the way, CNYRadio acquired CNYTVNews.com, adding coverage of happenings within the TV newsrooms of Syracuse and Utica.

Due to changing life priorities -- including a brief return to radio in 2014 -- Naughton placed CNYRadio.com back on hiatus in 2014, but the CNYRadio.com Facebook Page has remained active all along.  The Facebook page features a mix of original reporting and shared links to notable coverage spotted elsewhere.

Press releases from local radio and TV stations are still accepted for consideration via email or Facebook messages. We are most interested in significant items such as format changes, staffing changes or job postings.