Here's some of the staff from WICB at Ithaca College, at the school's homecoming weekend back in September.  Incidentally, today's the final day to cast your vote to help WICB win a national award. 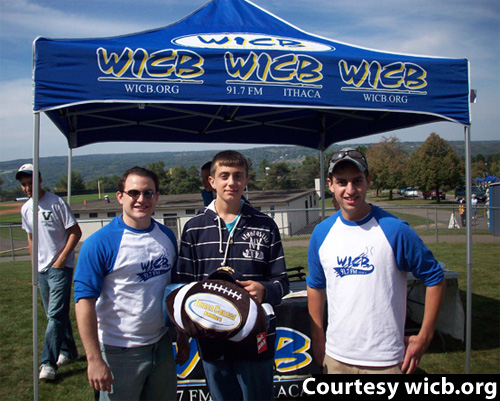 Left is Josh Giordano, WICB Student Station Manager; Right is Evan Schapiro, WICB Underwriting Director; in the middle is the the winner of a huge prize pack from the Ithaca College Bookstore.  Thanks to Schapiro for letting us know who's who in this picture.

As we reported earlier, WICB is one of the finalists for mtvU's "Woodie" award for Best College Radio Station in the entire country.  The station made it this far by rallying the campus and the entire Ithaca community to vote for it online.  Today is the final day of voting for the final round: CLICK HERE to cast your vote for WICB.

Winners will be announced next week in New York City.  We'll let you know what happens as soon as we can track down results.