WASHINGTON -- There seem to be conflicting reports on exactly how many people went to Washington, DC to witness the inauguration of President Barack Obama on Tuesday, but we know of at least two local radio journalists who made the trip.  And one even provided CNYRadio.com with his own account of how things went. 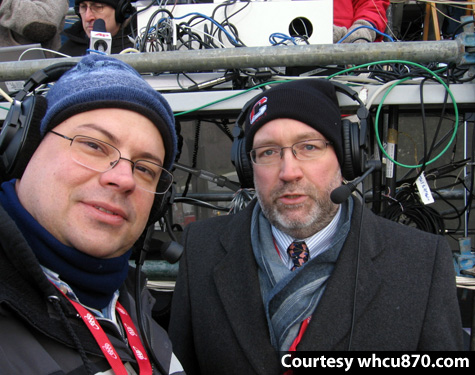 That's WHCU Assistant Program Director Dave Vieser on the left, and WHCU Programming/News Director Geoff Dunn sporting the Cornell hat on the right.  The co-hosts of WHCU's "Morning Newswatch" did their entire show live from Washington on Tuesday, took a 2-hour break, and then returned to the airwaves at 11am to provide live coverage of the inauguration.

In addition to the on-air work, Dunn posted updates to a multimedia blog, which includes written material, audio clips and plenty of photos -- including the above Photo of the Week.

Vieser also wanted to share this personal recap of Inauguration Day with his fellow CNYRadio.com readers:

It was a truly amazing experience, not just as a journalist, but as an American.

Despite a 4 ½ hour trip just to get to the Capitol—including nearly 2 hours in a packed Metro train…we got to our broadcast location (about 50 yards from the Presidential podium) around 7:30 AM, an hour later than we expected, and did live hits right up to the start of the ceremony, as our station then handed it off to the guys right next to us, Peter Maer, Steve Futterman, and Bob Fuss from the CBS radio network. On the other side of us, the morning team from CFRB, the news/talk leader in Toronto…also on our CBS row, WCBS-New York, KYW-Philadelphia, KCBS-San Francisco, KNX-Los Angeles, WBBM-Chicago, and WVEE-Atlanta.

It was tight quarters, but everyone got along, and appreciated being so close to keep warm—it was so darn cold—and the wind, ugh! Mind you—well over one million people, and not one single arrest by DC police…and believe me, the transportation situation would have been enough to drive anyone crazy!

Got Photos?
We're always interested in a look at what's happening today at your station... or a neat blast from the past.  With a new Picture of the Week appearing every Friday, we're always grateful for your help in feeding this hungry beast!  Send those pictures (or links) to cnyradio@cnyradio.com or upload them here.