SYRACUSE -- With the Syracuse University mens basketball team reaching the "Sweet 16" of the NCAA Tournament, you could say there's a wave of "Orange Fever" passing over the Salt City.  The morning team at MOViN 100.3/96.5 is doing their part to support the team. 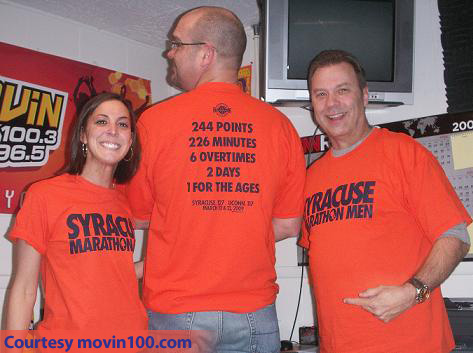 These are the "Syracuse Marathon Men" shirts you may have been hearing about lately... commemorating the SU squad's success against UConn after six overtimes in the quarterfinal round of the Big East Tournament.  (Believe it or not, simply Googling "6OT" will get you ESPN's recap of the game.)

We caught this shot on the "MOViN Morning Blog" at movin100.com.  But Orange Fever isn't just hitting the gang on West Kirkpatrick Street.  Throughout the week, we also heard of Marathon Men t-shirt giveaways on a few other stations.

Update 1:00pm - MOViN's Heather Daley gave 5 Marathon Man t-shirts to New Kids on the Block during a "meet and greet" before their concert last night at the Onondaga County War Memorial in Syracuse.  And at the end of the concert, the guys wore the shirts as they performed "Hangin' Tough."

Got Pictures?
We're always interested in what's happening at your station today, or an interesting glimpse back at something notable from the past.  Send your pictures to cnyradio@cnyradio.com or upload them via our Contact Page.