UTICA-ROME -- Just about a month after being introduced by a fake format flip that fooled local and national media alike, new KISS-FM (WSKS/WSKU) morning host Eric Thomas provides a glimpse of how things look from his viewpoint during the show. 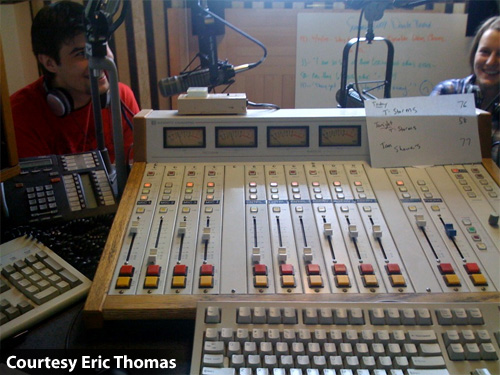 Thomas says that's MVP Joe behind the mics on the left edge of the shot, and intern Kelly on the right side.

Thomas revealed he would be the new morning host at the CHR two-station simulcast after listeners spent all weekend calling in with their memories during a "Goodbye KISS-FM Weekend" last month.  We ate the bait at first too, along with NBC affiliate WKTV, the Utica Observer-Dispatch and even AllAccess.com.

One comment on “POTW: An Eric's Eye View at KISS-FM”