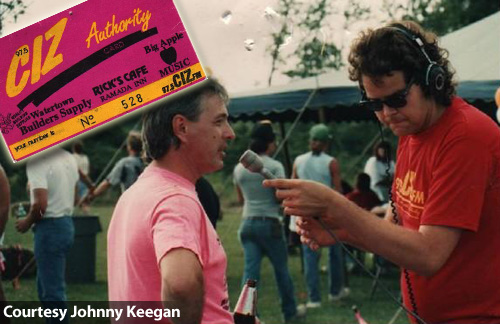 Keegan jokes, "I wish I still had hair to even have a mullet" in this 1992 shot from his very first remote for rocker 97-5 CIZ.  He notes the venue for this broadcast, the Mill Creek Bar, is long gone and replaced by a funeral parlor.

Another popular memory from the 1990s, in the upper-left corner, we threw in a scan Keegan included of the old "97-5 CIZ fm Authority Card" which was used for contesting and discounts at local businesses.  It seems like almost every station had their own version of these back then.

Keegan reminds us of some radio history -- the rock station moved down the dial to 93.5 (and retained the WCIZ call letters, but later rebranded to Z93) when the country Froggy format took over at 97.5 (WFRY).   That's where WFRY remains today.

Update 7/13 - Former WCIZ personality Matt DelSignore, now at KDKA/Pittsburgh, writes to remind us WCIZ made one more move down the dial since then -- to its current home at 93.3.  Our apologies for not catching that sooner!

Thanks again to Johnny Keegan for sending those in!

Got Pictures?
We're always interested in a look at what's happening at your station today, or a glimpse back to the past.  Just send your pictures to cnyradio@cnyradio.com or use the image uploader on our Contact Page.  There's a new Picture of the Week every Friday.