SYRACUSE -- The new week begins with a new--but old--additional choice for talk radio in the Salt City.  Leatherstocking Media Group is launching "CNY Talk Radio" on WFBL 1390, effective tomorrow (Monday) morning at 5:00am.  In other news from the Smokey Hollow Road studios in Baldwinsville, WSEN is no longer airing traffic reports from Tony Bombardo.

Leatherstocking GM Judy Kelly tells CNYRadio.com the lineup on WFBL will be anchored by Laura Ingraham, who will air from 9am to noon.   "We will ... bring several other top notch talk radio hosts with her," Kelly added, but said she could not provide the full lineup until after the launch.  We'll also learn tomorrow how the station will be filling the top-of-hour news window.

Those of you keeping score at home may remember it was just over six months ago when WFBL abandoned news/talk in favor of Oldies 1390.  At the same time, sister station Oldies 92.1 rebranded as Classic Hits 92.1, shifting its focus to music from the late 60s through the mid 80s.

No official confirmation, but it's a safe bet the new format's website will be cnytalkradio.com -- based on a WHOIS listing which says the domain was registered by Leatherstocking Media Group owner James V. Johnson on August 31.

Fans of the "Golden Oldies" format on WFBL need not worry -- Kelly acknowledges "there's a large and loyal audience that loves the format of the '50s and 60's' music that we play; we
want to make sure they still have the opportunity to enjoy that music."

You may recall back in September, WSEN(AM) started simulcasting "Oldies 1390" and the format will remain intact on WSEN, after WFBL makes the switch to talk.  Kelly tells CNYRadio.com the new ownership is confident in the format.  "In fact, we've got a couple of great concerts coming up in tne next couple of months that I know those listeners will love!  The Vogues will return to LeMoyne Manor on Friday November 20th, and we'll have a 'Doo Wop Show' at the Landmark this spring!"

Thanks to an observant CNYRadio.com reader who e-mailed when he noticed Tony Bombardo's daily traffic reports were missing from the morning show at Leatherstocking's Classic Hits 92.1 (WSEN-FM). 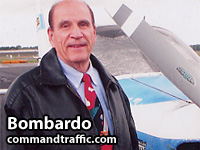 Judy Kelly confirms that the station's contract with Command Traffic expired on September 25th and station ownership simply chose not to renew -- chalk this one up to new and improved technologies.  The GM says, "He's done an excellent job reporting for us for many years, but we're looking to simplify things as we move forward. Department of Transportation cameras allow us to check the major highways on a continuous basis and allow us to give up to the minute traffic reports on all the major highways quickly and easily."

It's hard to argue that point -- a relatively new website called TrafficLand gives anyone the ability to view nearly two dozen traffic cameras located along the area's Interstate highways.

According to Bombardo's website, that leaves him with just two clients: ABC affiliate NewsChannel 9 (WSYR-TV) and Cram Communications' Hot AC MOViN 100.3/96.5 (WOLF-FM/WWLF-FM).  We've reached out to Bombardo for comment; we'll update the story if/when we receive a response.