New Twitter Feature -plus- Update on The State of the Wiki

Update 7:40pm - Thanks to user "tamesser" for bringing many of the Ithaca pages in the Wiki to life, and to "midatlanticengineer" for his work on several Utica pages! The CNYRadio.com Station Wiki is here to stay -- for now -- thanks to your votes in the poll that had appeared on the home page for the past month and a half.  But it's not a "done deal."  Details on why -- also a new site poll, and info about a new feature on the CNYRadio.com Twitter feed page, part of a mixed bag of updates in this article. 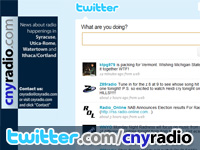 CNYRadio.com's Twitter account has been chosen to beta-test a new feature on Twitter.  All the Twitter feeds CNYRadio is following can now be sorted into lists -- so there are three lists.  One for people, one for stations and one for local shows.  So if you're looking for radio-related Twitter feeds here in CNY, go to our Twitter page and look for the lists on the right-hand side.  And if you know of any local radio personalities, shows or stations we're not following, let us know so we can follow them.

The poll question about the Station Wiki has been replaced with a new one -- when do you think we'll begin to see stations "go Christmas" this year?  Of course, the results are anonymous, so there aren't any bragging rights or prizes for guessing right (that wouldn't be fair since some of you may have inside info)... just might be fun to see what most people are expecting.

The Fate of the Wiki

We're saving the biggest item for last: thanks to your votes, the CNYRadio.com Station Wiki has a new lease on life -- for now. But as explained earlier, the Wiki needs to be more community-driven -- that's the whole point of a Wiki.  As you can see in the poll results below, support for the Wiki barely outweighed readers who didn't seem too interested.  More below:

Since support for the Wiki did win out here, it will remain open.  However, there needs to be more support for the Wiki to remain alive.  And no, "support" doesn't mean money -- rather, we're asking for your time by helping to fill in the blanks and get this project completed.  The Wiki can be a great resource, but only if the information it offers is complete, accurate, and up-to-date.

There are over 100 stations in the four markets this website covers.  Your humble CNYRadio.com Editor has already given the Wiki a big jump start by completing the pages for quite a few stations -- but with a "real" day job, life away from the Internet and the site's day-to-day news coverage being bigger priorities (sometimes not necessarily in that order), finding time to work on the Wiki is difficult.

That's where you come in -- by taking just 5 or 10 minutes a day to help complete the Wiki.  Find a station page that's not completed, and help fill in the blanks.  You don't have to fill in every section of the page... most of the information you need is readily available on station websites or on the FCC website.  Much of it is just a matter of taking the templates that are already present and deleting the "excess" info, or changing the call letters.

Don't even worry about whether you do it correctly or make mistakes: if you (collectively as an audience) can get things started by filling in the bulk of the information, I've got no problem going in afterwards to clean up the typos or any formatting errors.

The deadline is going to be right around New Year's.  Sometime in early January 2010, we'll gauge the progress of the Wiki.  If it appears the community is rallying towards completing the Wiki, it will remain online.  But if activity remains as dormant as it has been over the past few months, I'd sooner prefer to shut down that part of the website and replace it with something much less informative, but much simpler to maintain.

So if you were among the plurality who voted to say you use the Wiki all the time, or you think it could be better... well, here's your chance to make it better.  The more you do, the more I will do.  It's a group effort -- just like Wikipedia, there's no way it can all be written and maintained by just one person.

Thank you very much for taking the time to read through this entire post.