UTICA-ROME -- A little over a week ago, we witnessed the end of the WRUN call letters on 1150 AM, after more than six decades of service.  The station was recently purchased by Digital Radio Broadcasting, and the call letters changed to WUTI.  With special thanks to Jerry Reed, we're able to take a trip back in time to the very beginnings of WRUN in this special "triple feature" Picture of the Week. 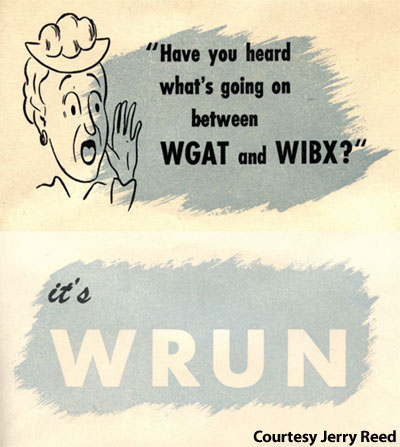 That's just an excerpt from a flyer pre-promoting the launch of WRUN, which was poised to become the Utica-Rome market's first 5,000-watt AM station.  CLICK HERE to see the entire flyer in PDF format.  (If you need the free Adobe Reader to view PDF files, click here.)

You may recall (or if not, check the history on the CNYRadio.com Station Wiki) the call letters originally stood for Rome-Utica News, as the station was built and operated at first by the Rome Sentinel Company.  When the station launched, it was the area's first 5,000-watt AM station, boasting a coverage area stretching from Rome to Herkimer.  At the time, dominant player WIBX was only 250 watts, and, according to Sentinel reports, it didn't cover Rome at night.  The company promised WRUN's signal would cover both cities around the clock.

Also available for your historical viewing pleasure in PDF format:

Ironically, we all know today WIBX has long enjoyed the last laugh, having since itself upgraded to 5,000 watts, eventually emerging as the market's only news/talk station.  For most the past several years, WRUN was simply used to simulcast other stations in the market, most recently as a repeater for Albany-based WAMC.  The public broadcaster transferred the WRUN calls to a brand new FM station earlier this year, so they haven't completely disappeared from the market.

Our thanks again to Jerry Reed for these excellent contributions.  You can check out his website here -- while he hasn't done local radio in awhile, he's still available for freelance voiceover work.

The next two Fridays are holidays... so we're hoping to have some holiday-themed Pictures of the Week.  Have any pictures of special station events from Christmases or New Years' past?  Maybe some interesting (but family-safe) shots from your stations' holiday gatherings?  Send them to cnyradio@cnyradio.com or upload via the Contact Form.  If you do send us any party pictures, be sure to let us know who's in the picture.