SYRACUSE -- It's not often that a local radio station can grab the attention of reporters from other media for hours on end.  But the clever folks at WSYR managed to do just that back in the early 1990s with a unique billboard promoting the news/talk station. 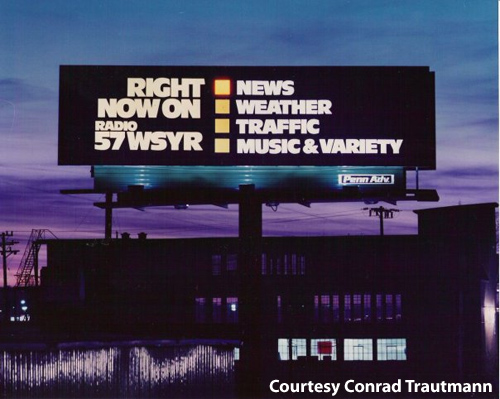 Remember this billboard?  Former WSYR Chief Engineer Conrad Trautmann recently posted this photograph on a Facebook group he started to share memories with his former co-workers, back when the stations at Bridgewater Place were owned by NewCity Communications.

As you can guess, the light changed on the billboard, perfectly in sync with whatever happened to be on the air at any given time.  Trautmann tells CNYRadio.com, "we had the lights tied to the tallys on the console in the air studio, the console which is still in use today, I believe."

To radio folk, the concept seems simple enough, but Trautmann says the billboard was apparently pretty mystifying to some:  "I saved an article in the local paper where a reporter sat for hours waiting for the billboard to be wrong once and he couldn't catch it."

Trautmann, who's now the Executive Vice President of Technology at Dial Global/Triton Radio Networks, says he doesn't recall exactly when the billboard was in place, but he narrows it down to "probably the early 1990's since we moved into Plum Street in '91."  Of course, WSYR is now owned by Clear Channel, and the studios are still located in that same building to this day.

He says the billboard was located along the south side of I-690, somewhere near the Thompson Road interchange, on the east side of Syracuse.

This is just one of many photographs Conrad and some of his former co-workers shared from their days at NewCity.  You can see more by visiting the NewCity Syracuse Alumni group on Facebook.  Our thanks to Conrad for permission to re-post the photo here, and for providing the background info about the billboard.  (With so many advances in technology in the past 15-20 years, it's surprising local radio stations aren't doing anything similar to this at all today!  Seems like an excellent promotional tool, but that's just our two cents.)

There's a new Picture of the Week every Friday, and it's a hungry beast to feed!  We're always grateful for your snapshots of whatever's happening today at your station, or a glimpse back at the past.  Send your photos to cnyradio@cnyradio.com or upload them via the Contact Form (which you can also access anytime by clicking "Contact" in the menu at the top of the page).