CENTRAL NEW YORK -- Plenty of local stations helped their communities celebrate Saint Patrick's Day by taking part in local parades and other events.  It wouldn't be fair to just show one station, so we've got a few different ones sharing the honors in this edition of Picture of the Week.
Updated 8:15pm to add New Country WOLF 105.1. 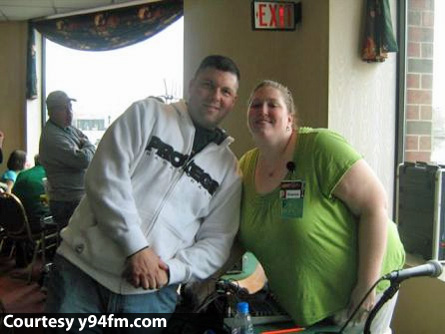 Our first picture features CHR Hot 107.9 (WWHT) morning co-hosts Marty and Shannon -- posing inside the Hotel Syracuse.  All of the Clear Channel cluster stations joined forces to promote a party inside the hotel, where attendees could watch the parade while staying warm.  Click here to see the other 55 pictures posted on sister station Y94FM's website. 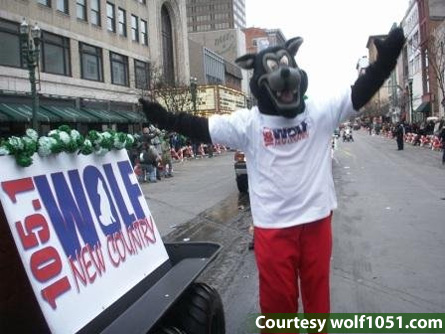 The gang at New Country WOLF 105.1 decided to brave the cold, windy weather -- and participate in the parade.  Here's their mascot (appropriately enough, a wolf) with the WOLF float headed down the parade route. 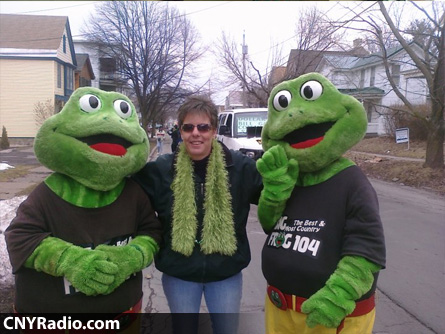 An hour eastward on the Thruway, our first Utica picture features morning co-host Polly Wog from country station Big Frog 104 (WFRG).  With the help of some leprechaun magic, mascot Jeremiah B. Frog managed to clone himself for the day so he could greet parade spectactors on both sides of Genesee Street.  The Frogs and Polly posed for our camera while WFRG and its sister stations waited in a staging area before the parade.  (Disclosure: Your editor helped represent Lite 98.7 WLZW in the parade.) 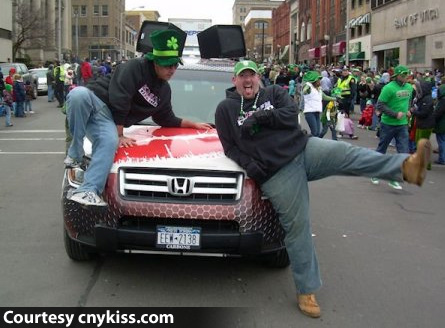 A quick scan of various Utica radio station websites also turned up an entire album of photos from Kiss-FM (WSKS/WSKU).  Here are a couple members of the Kiss Krew posing with their station vehicle.  (We're pretty sure that's Gary "Big Poppa" Spears on the right, but we can't see enough of the other guy's face to guess who he is.)  You can see many more pictures on the station's website.

Remember to keep an eye on the CNYRadio.com Twitter Feed -- we had an open call twice this week for picture submissions.  In addition to tweeting every time we post a new story, we also post "Twitter-exclusive" items like this from time to time.  Follow @cnyradio to make sure you don't miss out next time.

You can also follow any of our three "lists" to automatically follow local stations' Twitter feeds, local air talent, or local shows. (It's a lot easier than adding them all one-by-one.)