LOS ANGELES -- Our latest Picture of the Week comes from the "Where Are They Now" file.  An observant CNYRadio.com reader tipped us off to the blog of the famous Dr. Drew Pinsky, host of the popular Loveline show -- where Pinsky posted a picture from a recent meeting between himself and a former K-Rock (WKLL/WKRH/WKRL) personality. 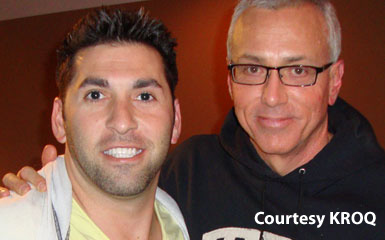 Alongside Dr. Drew, that's none other than Kevin Klein, who was known for part of his time in CNY as "F'in Kevin."  On his blog, Dr. Drew recalls the first time he met Klein, when the latter was a student at Syracuse University in 1998.  Pinsky and former co-host Adam Carolla were in town to speak to students, where Pinsky recalls making the "Faux Pas" of telling students to avoid majoring in communications -- not realizing SU's Newhouse School is one of the biggest communication schools in the nation.

You may recall Kevin, who went by the last name Michaels when he was hired at K-Rock in 2002, started out as the station's night jock.  In January 2004, he was promoted to mornings.  He wouldn't stick around much longer though -- that June, Klein left K-Rock for New York City, where he would address listeners nationwide via satellite radio.

These days, Klein's on the left coast, minus the "F'in" before his name, hosting the L.A.-based Playboy Morning Show on Sirius satellite radio channel 198.

Ironically, while Klein was a member of the K-Rock staff, the syndicated Loveline now airs across town at Citadel's 95X (WAQX), every night except Saturdays, from 10pm to midnight.

We're always interested in a look at what's happening today at your station or a look back at notable items from the past.  (Any broadcasters in Salt Lake City to cover SU?)  Send those shots to cnyradio@cnyradio.com.  Our thanks to Peter Robson for alerting us to this week's photo -- Peter, we tried to thank you via email, but got an error message on your return address.  You said it was OK to use your name when you filled out the Contact Form, so thanks again for the tip!