SYRACUSE -- Put your seat belts on and hang on tight, as our latest Picture of the Week takes us back in time to 1980.  Sunny 102's Big Mike, working for the former 94 Rock at the time, had the chance to meet Charlie Daniels.  We wonder if he'll wear the same outfit when Charlie Daniels performs at the Taste of Syracuse tomorrow night... 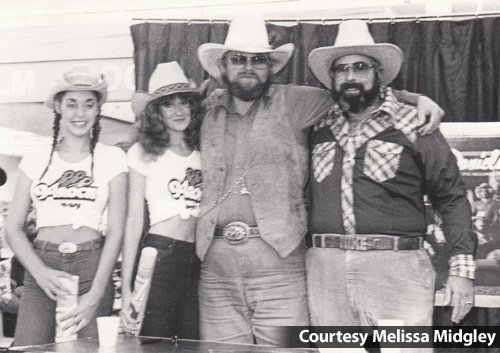 We didn't dare ask Big Mike, because we're not entirely sure if he knew we had this picture, or if it's a surprise.  Our thanks to his Sunny 102 (WZUN) morning co-host Melissa Midgley, who explains, "I snagged this photo of Big Mike and Charlie Daniels from 1980 and thought you might get a kick out of it! Since Charlie Daniels will be here Saturday night I found this to be the perfect opportunity to submit this photo for you."

We certainly did get a kick out of it, especially the "MIKE" belt buckle and the appearance of the old "94 Rock" logo.  (For those unfamiliar with Syracuse radio history, you would have heard rock music at 94.5FM before it changed to Y94FM in 1983.)

And as mentioned earlier, Charlie Daniels will be in town this weekend.  He's the headliner for Saturday night's lineup at the Taste of Syracuse.  Sunny 102 and the rest of the Galaxy Communications cluster are media sponsors for the two-day event, which begins today.

First, thanks to the other submissions we had coming in this week... including some Memorial Day parade pictures.  This vintage shot was just too good to pass up, and we'll have another chance to do a parade photo roundup when the 4th of July rolls around.  In the meantime, we've still got another four Fridays until then, which means we need four other pictures and yours could be next!  If you've got something special happening at your station -- or a look back at someone or something notable from the past -- send those shots to cnyradio@cnyradio.com or if attaching files to email isn't your thing, upload them via the Contact Form.