UTICA/ROME -- Even though they work in the same building every single day, spending hours in the same studio -- the full-time members of a radio station's on-air team are usually not there together at the same time.  But for Regent's Big Frog 104 (WFRG), there's always at least one chance to see the entire staff together -- Frogfest. 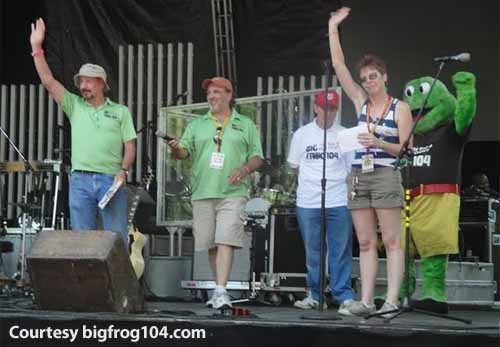 At far left is Matt Herkimer, who's been with the station since it launched as "96 Frog" in 1988.  Moving towards the right, afternoon host Tad Pole, middayer Greg "Splashin'" McShea, morning co-host Polly Wogg, and station mascot Jeremiah B. Frog.

The crew was together for "Frogfest 22," the station's annual listener-appreciation concert.  Aside from the everyday per-vehicle fee for parking at Verona Beach State Park, it cost listeners nothing to gain admission to the show.  Following several local acts, the station signed national recording artist Josh Turner as the headliner.

There are many more pictures -- of the fans and the performers -- on the Big Frog 104 website.

We're always interested in a look at what's happening today at your station, or a look back at something or someone notable from the past.  Send those shots to cnyradio@cnyradio.com or upload via the handy Contact Form.  There's a new Picture of the Week every Friday, and your editor is always very grateful to have submissions, rather than having to track down photos himself.

CNYRadio.com editor Peter Naughton is a part-time, every-other-weekend on-air personality at Lite 98.7 (WLZW), a Townsquare Media sister station of WFRG.  This picture was chosen for use without any influence or direction from management at Townsquare Media.