SYRACUSE -- You've no doubt heard about various concert tours postponing shows or calling them off altogether, citing lack of ticket sales (likely due to consumers getting fed up with high prices).  But one local PD says, "we just want to show if you do it right, [look] what happens." 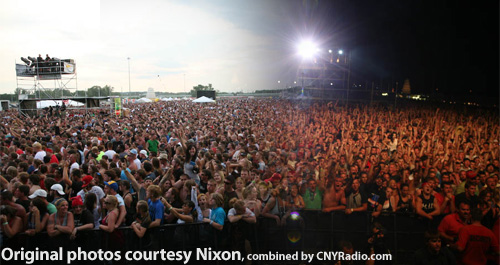 K-Rock (WKRL/WKRH/WKLL) program director Nixon sent in two photos of the massive audience from last month's K-Rockathon 15, which took place at the New York State Fairgrounds in Syracuse.  We Photoshopped the individual day and night photos  into one combined image.

Nixon tells CNYRadio.com, "the final count is over 17,000, making it the biggest K-Rockathon since 2002."  That year, the concert was held at the Oswego Speedway.

This year's K-Rockathon, the 15th installment, featured a dozen national acts and several local acts.  This was the second year in a row the mega-concert took place at the State Fairgrounds.  The K-Rockathon website has links to many more photos and videos.

We're always interested in a look at what's happening today at your station, or a look back at something or someone notable from the past.  Thanks again to Nixon for sending these in.  Your picture(s) could be next!   Send those shots to cnyradio@cnyradio.com or upload them via the Contact Form.  There's a new Picture of the Week every Friday.