SYRACUSE -- Observant CNYRadio.com readers have noticed something interesting on their TV screens: program listings for WSYR-DT's 9.2 subchannel show timeslots devoted to local hosts from Newsradio 570 WSYR... but so far, neither host has appeared on TV during their respective listed timeslots. Updated 9/15 at 5:45pm. 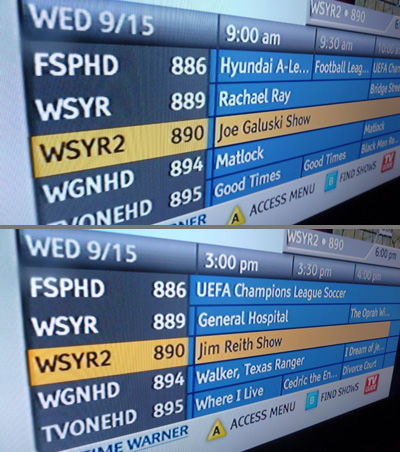 If you've got a digital cable service from Time Warner, hit the "Guide" button on your remote and scroll through the interactive program guide to Channel 890.  (On Verizon FiOS, it's channel 470.)  Scroll to 9am and you'll see two hours blocked in for "The Joe Galuski Show."  The TV program grid offers no further information, but listings at tvguide.com promise "highlights" from that morning's radio broadcast.

Scroll ahead to 3pm, and you'll see another familiar name: "The Jim Reith Show."  Again, no description on the cable box program guide, but tvguide.com advertises "a simulcast of a WSYR news-talk show that tackles topical issues."  Notably, the Reith simulcast is listed to end at 6:30 -- that's when the ABC affiliate has always started the replay of it's 90-minute early evening news broadcast.

The news might be exciting to fans of either drive time radio host -- but our reader who discovered the listing for Galuski's "highlight show" on Monday said WSYR-DT 9.2 aired a weather-related documentary program instead.  And when your editor tuned in at 6:00 tonight to take the pictures you see accompanying this article, the channel was airing Live Doppler 9 instead of Jim Reith. 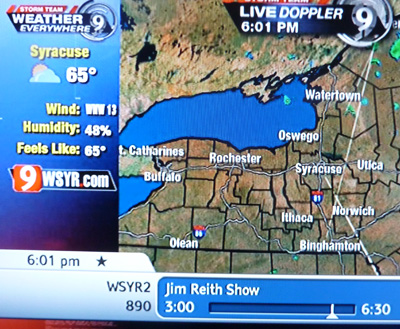 So what happened?  Why haven't Galuski and Reith appeared on TV yet?

Updated 9/15: WSYR-DT Chief Engineer Craig Riker tells CNYRadio.com, "it is an error in the data entered for the program guide information, it will be corrected."  CNYRadio.com had also reached out to management at WSYR radio for comment, but did not receive any response.

TV listings are usually required to be submitted to companies like TV Guide several weeks in advance. In the absence of an official explanation, we'll presume there may have been some last-minute issues that arose too late to get the listings updated.

If you checked the tvguide.com listings and clicked on the title of either show (here: Galuski | Reith), you'll find a page that says the shows will be off next week, then returning September 27th.

Elsewhere in the market, sports-talker Brent Axe's afternoon drive show on Citadel's The Score 1260 (WSKO) has been simulcast on the local Time Warner Sports channel since August 2009.

One comment on “TV Time for Local WSYR Radio Hosts?”