UTICA/ROME -- News/talker WIBX 950 turns 85 years old on Sunday.  We hadn't realized the big milestone was approaching until CNYRadio.com reader Jerry Reed sent in a picture from the very early days of the station -- along with a history of the station he compiled in 1991.  So we have not only a picture, but also a story to share this week! 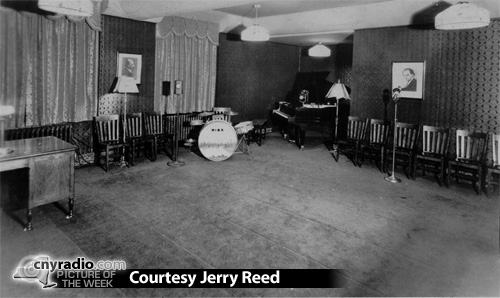 Jerry writes, "the photo is believed to be of the WIBX studio at the Hotel Utica, which would put the date sometime after 1926.  I think this is the earliest known photo of the WIBX studios.  I could be wrong."  While online pictures from this decade are rare, we couldn't find any other photos claiming to have an earlier date.

The original photo scan Jerry submitted is pretty large -- we had to shrink it down to fit on the page.  So here's another version, cropped to give you a closer look at the equipment including a drum set and a few microphones, all carrying the WIBX call letters. 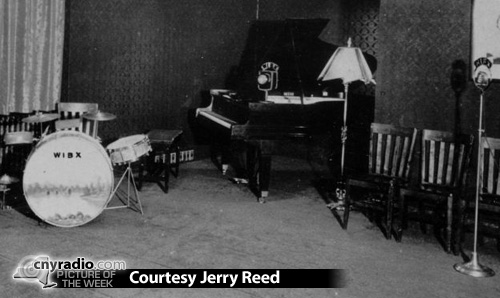 Finally, here's the historical profile Jerry wrote about WIBX in 1991.

On July 29, 1925, the Radio Division, Department of Commerce granted an authorization for a new broadcast station with the sequentially issued call letters WIBX assigned, to Grid Leak, Inc., radio dealers, of Utica, New York. The station was installed at the Grid Leak, Inc. store at 236 Genesee Street, Utica, and went on the air December 5, 1925 on 205.4 meters (equal to 1460 kilocycles) with five watts of power. Earlier, Grid Leak, Inc. "had installed a low power station for tests in June of 1925 under call letters WN". William N. Terrill was operator of the non-licensed "WN" for these "tests". Manager of Grid Leak, Inc. and it's new WIBX was A.E. Schrock.

On April 14, 1926, WIBX, Inc. was organized to operate WIBX to separate the broadcasting station from the radio dealership business. 50% interest in WIBX, Inc. was held by Grid Leak, Inc. and the remaining 50% interest was owned by Henry H. Barnard (president); Josephine Barnard (Vice President); and A.E. Schrock (Secretary Treasurer). These same principals also fully owned Grid Leak, Inc. In May 1926, WIBX was moved to the Hotel Utica, 102 Lafayette Street. The lease was terminated on May 1, 1926 at the station's former location at 236 Genesee Street. On May 5, 1926, the Radio Division granted authority to WIBX to begin operating from the new location, and on Thursday evening, May 6th, WIBX returned to the air from it's new studio and transmitter site in the Hotel Utica, also raising power from 5 to 150 watts.

WIBX illegally began using 234 meters (equal to 1280 kilocycles) for it's broadcasts in late 1926. During this period, the United States was without effective radio regulation, as a ruling from the Attorney General in May 1926 determined that the Department of Commerce did not have the power to assign wave lengths to broadcast stations. Some stations took advantage of this fact and took more favorable dial positions; WIBX, languishing on 1460 kilocycles, opted for the more favorable 1280 kilocycles. In April 1927 with the advent of the Federal Radio Commission assuming control of radio regulation, WIBX was licensed for a new dial position 1260 kilocycles.

In the early months of 1928, WIBX was authorized to increase daytime power to 300 watts (nights still 150 watts). Also in early 1928, the Boston Store purchased the station to protect it as a Utica radio station. Majority ownership in license WIBX, Inc. was acquired in April 1928 by John C. Drummond of Buffalo, New York from the Boston Store with the provision that it would remain in Utica. In a major frequency reallocation program placed into effect by the FRC on November 11, 1928, WIBX was ordered to change frequency from 1260 to 1200 kilocycles. Also in late 1928, power of the station was reduced to 100 watts.

December 1st 1928 the studio and transmitter of WIBX was relocated from the Hotel Utica to newer quarters in the First National Bank Building at 187 Genesee Street; with transmitter installed on the top floor of the 13 story building, and studios inaugurated on the 9th floor. John C. Drummond sold his interest in WIBX, Inc. in August 1929 for $45,000 to principals of the Buffalo Broadcasting Corporation.

Daytime power of WIBX was again raised to 300 watts (nights remaining at the 100 watt level) in early 1930. WIBX, Inc. was acquired in March 1931 by Percy B Brown and Scott Howe Bowen. Mr. Bowen later bought out Mr. Brown and became the sole owner. In the early thirties, Dale Robertson (former owner manager of WIBM Jackson, Michigan) was appointed Manager of WIBX. In 1935, WIBX affiliated with the Columbia Broadcasting System network. President of WIBX, Inc. by 1936 was Scott Howe Bowen. On November 10, 1936, WIBX was granted a construction permit by the Federal Communications Commission to move it's transmitter from atop the First National Bank Building to a new site; install a new vertical radiator; and reduce day power from 300 to 250 watts. In early 1937, power was reduced to 250 watts (100 watts nights) from a new transmitter site on Schuyler Street, Marcy, New York, utilizing a new Blaw Knox 2204 foot self supported vertical radiating antenna. In late 1938, Manager Dale Robertson left the station and was replaced as Station Manager in 1939 by E. K. Johnson. Also in 1939, nighttime power of WIBX was increased to 250 watts, making the station a fulltime 250 watt facility.

The FCC on May 2, 1947 authorized WIBX to change frequency from 1230 to 950 kilocycles and raise power from 250 watts to 5,000 watts and change it's transmitter location. In early 1948, WIBX inaugurated it's new multi tower directional antenna facility at a new site on Clark Mills Road in the town of Whitestown, concurrently raising power to 5,000 watts and switched to 950 kilocycles. In 1949, President and General Manager of WIBX was now Mrs. Margaret Bowen Stevens.

In October 1946, WIBX-FM went on the air on 96.9 mhz with 250 watts.  Less than a year later it's power was increased to 9,000 watts. In early 1951, a new building to house the FM transmitter was built on Smith Hill in the town of Deerfield. Sometime in the next few years the WIBX-FM license was turned in and WIBX FM went off the air.

In the early sixties (1961-62) studios of WIBX were moved from 187 Genesee Street to the station's transmitter site on Clark Mills Road, Whitesboro, NY. Frederic C. Bowen became President as well as General manager of WIBX in 1972.

In 1971 WIBX, Inc. was granted a construction permit to build a new FM station on 95.5 mhz. But because of some legal delays and frequency conflicts the new station didn't actually start broadcasting until sometime in 1972 on 98.7 as WIBQ. The transmitter was located in the original FM tower building on Smith Hill.

In 1979 WIBX was sold to Marathon Communications, a corporation headed by Eastman Radio Chairman of the Board Frank Boyle.

WIBX was sold again in 1985 to a group of broadcasters from New York City and Chicago. Rebs, Inc. included the following owners Richard James, formerly of WABC and the ABC Radio Network, Steve Hunter & John Roberts (Bob Dearborn formerly of WCFL Chicago) and others.

WIBQ's call was changed by it's new owners in 1985 to WNYZ changing from a beautiful music format to rock and roll.  REBS, Inc. sold WIBX and it sister station WNYZ in 1988 to Maritime Broadcasting. Maritime changed the call letters of it's FM again, this time to WLZW.  The call change heralded another format change. This time to a "lite and easy" type of music.

*WIBX's format in it's early years and through 1979 was variety, drama, music, news and sports. Longtime local residents fondly remember: Nate Cook, the timekeeper on the Musical Clock; the rich baritone voice of Elliott Stewart; Youth Presents with Betty Cushing Griffen(Betty Allinger); Ralph Allinger and Hal Smith. Smith is best known for his role as Otis the Drunk on The Andy Griffith Show and the voice of many Hanna Barberra cartoons.

News/talk/sports with some music was the emphasis from 1979 through 1985. Music was then dropped as a part of the format except for Polonaise, the Polish program on Sunday morning, which is reported to be the oldest continually broadcast foreign language program in the country. Today WIBX's format continues to be news/talk/sports.

WIBX is the 26th oldest continuously licensed broadcast station in New York State. But that number many have increased slightly as one or two of the original AM stations have gone dark.

This information was compiled from several sources which include:

We thank Jerry for covering the first 66 years.  Since 1991, WIBX's formula of news/talk/sports has remained intact, despite a number of changes in ownership (like 950 Communications, Black River Broadcasting, and perhaps others we're missing) and changes among the on-air staff.  The talk lineup continues to include long-running local programs like SportsWatch, Auto Talk, Polonaise, and the annual Heart Radiothon, to name a few.  In recent years, WIBX has added more local sports coverage, including Utica College athletics, and high school football and basketball coverage.

Perhaps the biggest recent change came in 2003, when WIBX and its sister stations moved their studios and offices in 2003, to a brand new facility along River Road in Marcy.  But the 5,000-watt signal continues to originate from the station's 4-tower array along Clark Mills Road in Whitesboro.

The AM/FM combo of WIBX and WLZW is still intact, joined over the years by WODZ, WFRG and WRUN.  The latter was sold in 2005.  Today, the 4-station cluster is owned by Townsquare Media.  Mary Jo Beach has served as VP/GM of the cluster for more than a decade, spanning at least two former owners including Regent Communications and Forever Broadcasting.

Our most sincere thanks go out to Jerry Reed for generously sharing both the photograph and his wonderful profile detailing the history of WIBX.  We're always looking for interesting photos from local radio history -- or even just a quick snapshot of a new/recent happening at your station.  Send those shots to cnyradio@cnyradio.com or upload them via the Contact Form.  There's a new Picture of the Week every Friday.