UTICA/ROME -- Fans who've been waiting for longtime local radio personality Bill Keeler's comeback won't have to wait much longer.  Keeler today told CNYRadio.com he's finalized his lineups for his network of online radio stations.  The official launch of "MOVA Radio" and Keeler's new morning show will happen tomorrow at 6:00am.

Keeler says the official launch of MOVA Radio will include five channels of audio, as follows:

"This has been something I've wanted to do for a long time," said Keeler.  But in the past, internet radio had limitations -- namely, the fact that most people had to be glued to a computer to listen.  "Now with the smartphone technology and broadband internet, I think this is the perfect time to launch," he added.

Keeler's setting his sights high, announcing he intends to double MOVA Radio's offerings to ten channels by the end of the summer.

"I can have new stations up tomorrow and I don't have to wait for FCC approval.  The fact that I can add multiple stations affords me the flexibility to create niche formats that cater to a smaller audience.  These are people that never get taken care of by local radio," Keeler said.

Keeler also points out that internet radio is uncensored.  A banner on the MOVA Radio homepage says "In 1992, he was fired for saying 'condom.'  Now in 2011, he's on a radio station where he can say 'f&#k.'"

While some might question MOVA Radio's ability to be financially successful, Keeler says his entire staff from his WXUR show is still on the payroll, and he's even made some new hires.

We previously reported that Keeler had hired "Hard Rock Harry" Enea away from WXUR to become program director of the "Hard Drive" channel.  Now, Keeler says he has also hired Joel Oriend to produce his morning show.  When Keeler signs off at 10am, Oriend and Mark Piersma will remain in-studio to co-host their own show afterwards.  Keeler also says he's hiring additional salespeople this week. 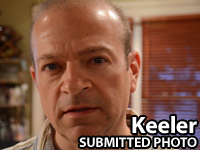 "I know exactly what I'm getting into," Keeler said.  "It wasn't that long ago that AM stations ruled the airwaves and no one would even consider investing money in FM."  By contrast, he points out that today, some station owners are practically giving away AM stations, "and we're all in jeopardy as we face the largest technology transition since the start of broadcasting itself."

Even if MOVA Radio isn't a blazing success right out of the gate, Keeler says, "I'm lucky enough to have other businesses that allow me to bundle advertising packages so the pressure to sell advertising on these internet stations isn't there."

Keeler says he's confident his fan base is large enough to support the new venture.  "I've always believed that if you create content that people want to hear, they'll find a way to listen, and I'm about to put my beliefs to the test."

In a separate news release, we've been informed that the schedule on MOVA Radio's "Hard Drive" channel will include the Vermont-based "Floydian Slip" show, produced and syndicated by Ithaca College graduate Craig Bailey.  The show launched at the college's VIC-106 back in 1989, when Bailey was a senior.

MOVA Radio is the show's 16th affiliate, and the one-hour weekly show will be carried on Sunday nights at 8pm, starting next weekend.