ITHACA/CORTLAND -- Central New York enjoyed beautiful weather yesterday -- the warmest we've seen in quite some time.  With a high of 59º observed yesterday in Ithaca -- it's tough to believe the battle Jim MacKay had to wage just to get to work at ESPN 1160 (WPIE) just a week earlier. 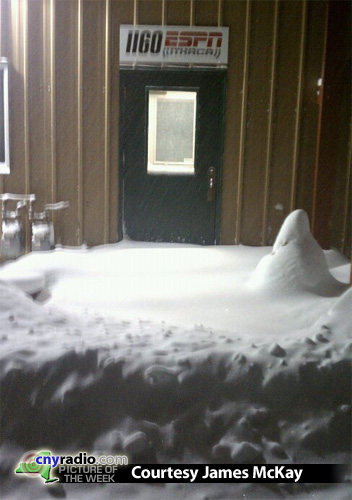 Jim lets the picture tell the story, simply writing "this was what I came to on Monday morning to do my morning broadcasts."  That was Monday, March 7th -- the day the entire region got socked with what we hope was the last major snowstorm of the season.  Ithaca officially got 15 inches of snow that day, according to the Northeast Regional Climate Center at Cornell University.  Fifteen inches in a day is a big deal considering Ithaca received only 27 inches of snow during the entire month of February.

Definitely not the most pleasant way to start the day... but we appreciate you taking the time to share!

We're always interested in what's happening today at your station, or a look back at something "classic" from the past.  Send those shots to cnyradio@cnyradio.com -- despite the email address, yes, we also encourage and accept TV-related photos!  There's a new Picture of the Week every Friday.  As of right now, we've got enough reader submissions to get us into April, but as long as we still have Fridays every week, we'll need more pictures!