FULTON -- It wasn't on your calendar, but this past Wednesday was officially "Christie Casciano Day" in the City of Fulton.  The mayor presented Casciano with the proclamation on Wednesday evening, as she hosted an annual ceremony commending heroic actions of the emergency workers who serve the city. 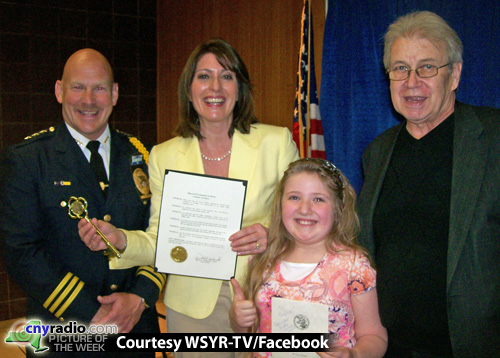 According to the NewsChannel 9 Facebook page, pictured from left are Fulton Police Chief Orlo Green, Casciano, "a young fan named Kaylee" and Fulton Mayor Ronald L. Woodward, Sr.  Casciano is holding a Key to the City in one hand, and Woodward's official proclamation in the other.

In addition to co-anchoring the ABC affiliate's Eleven @ 11:00 newscast, Casciano is well-known for her work in spotlighting the efforts of local law enforcement agencies.  She's also the primary face behind the station's "sister" website, OnTheLookout.net, which shows viewers photos and videos of local criminal suspects.  The website recently celebrated a milestone, surpassing 200 arrests made thanks to viewer tips.

We're always interested in a look at what's happening today at your station, or a nice blast from the past.  Has your station not been featured in Picture of the Week in quite some time... or ever at all?  You can change that by sending your shots to cnyradio@cnyradio.com or by submitting via our Contact Form.  There's a new picture every Friday, so we're always looking for more!