GRANBY -- Our sympathies go out to the family, friends and colleagues of Chris Ulanowski.  The former news director for the WRVO Stations has died at 51.

According to an obituary published Sunday night, there will be no calling hours.  Graveside services and burial are scheduled for Wednesday morning at Fairdale Cemetery in Hannibal. 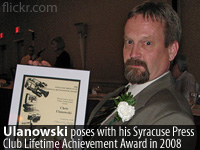 Ulanowski worked for WRVO for more than 25 years, winning many awards along the way, including the Syracuse Press Club's Lifetime Achievement Award in 2008. He exited the NPR affiliate in 2009.

In 2001, Ulanowski won a national award from Public Radio News Directors Incorporated for a call-in program he hosted, focusing on issues surrounding the installation of bricks with religious comments in a sidewalk at Mexico Academy and Central School.