Updated 3/6/13 -- ITHACA -- While some sources (like Wikipedia) note that college radio "became commonplace in the 1960s," the folks at Ithaca College have the distinction of being ahead of the curve.  Their campus radio station, WICB, has a history dating back to the late 1940s.  A photo from the Ithaca College Library's website shows how the studio looked in 1958. 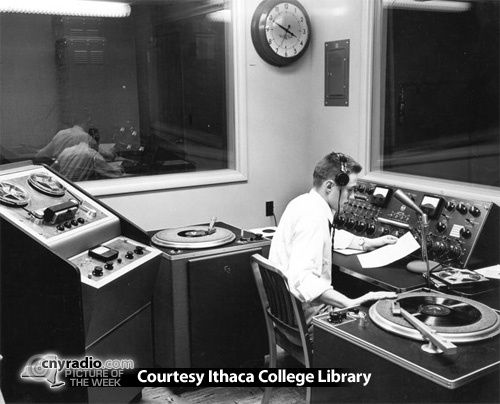 The exact start date of WICB (originally known as WITJ, according to the library) was either 1947 (if you trust Wikipedia) or 1949, according to the station's own website.  Rather than take sides, the post we found on the library's website puts the start date in "the late 1940s."  The FCC website only stores records dating back to the late 1970s, so a quick look there couldn't settle the bet either.

New Information 3/6/13:  When we originally featured this "Picture of the Week" in 2011, we said the Ithaca College Library website did not identify the DJ in this shot, though it was certain this photo was taken in 1958.  We invited readers to post comments with their guesses on the name of the DJ, and to identify the equipment.  While we did have one guess in the comments (further down the page), we heard today from the DJ himself!

Allen Faust, Ithaca College Class of 1960, writes to tell us he's the man in this photograph.  These days, he's a producer with Fox News, and here's what he remembers of this photo and the studio:

The same picture hangs on the wall of the IC Campus Center across from the snack bar.  I believe the control board was an RCA, and the tape machine behind me is an Ampex.   I don’t recall the make of the turntables.

Our thanks to Allen for happening upon CNYRadio.com and taking the time to write in!

We were lucky to find this picture surprisingly quick with a Google Images search for "Ithaca radio," but we always prefer to feature photos submitted by you, our readers.  Radio or TV -- Syracuse, Utica or Ithaca -- recent events or classic flashbacks -- we're always appreciative for your submissions.  Send those shots to cnyradio@cnyradio.com or upload via the Contact Form.  There's a new Picture of the Week every Friday.