SYRACUSE -- Although quite a few people spotted the Google Maps Street View car over the summer (including Utica's WLZW, Syracuse's NewsChannel 9 and the Syracuse Post-Standard), it seems most people catch it after it has passed by.  But morning host "Big Mike" Fiss of Sunny 102 (WZUN) and Mix 102.5 (WUMX) was lucky enough to spot the car before it arrived -- with enough time to run outside and pose for the camera. 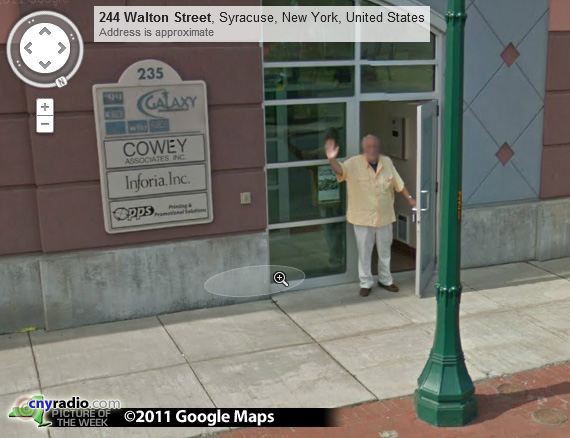 Earlier this year, we realized that Galaxy's Taste of Syracuse event was captured from space for Google Maps Satellite View.  Big Mike saw the feature and wrote in to tell us about this photo.  The story is pretty straightforward -- Fiss explains, "A few months ago I was in the station's kitchen and saw the Google Maps car coming down the block, so I ran outside."

If you don't believe our screen shot, click here to see it for yourself right on the Google Maps website.  Google never reveals the upcoming schedule for the Street View cars, so it's anyone's guess how long this shot will be there.

And before anyone rolls out the old "he's got a real face for radio" quip, we should probably note that Google automatically blurs out faces and license plates, to satisfy any concerns about personal privacy.

We've already got next Friday's photo lined up, but after that, the well is dry again.  Anytime you've got something new happening at your station -- celebrity visits, big holiday fundraisers, concerts, or anything else photoworthy, be sure to send a shot to cnyradio@cnyradio.com.  Nothing new going on?  We love your "blast from the past" shots as well.