SYRACUSE -- When it comes to local television news, the Carrier Dome is usually the domain of sports reporters and sports anchors.  But ever since the Bernie Fine story broke about two weeks ago, stations have been changing their usual staffing arrangements to cover the developments. 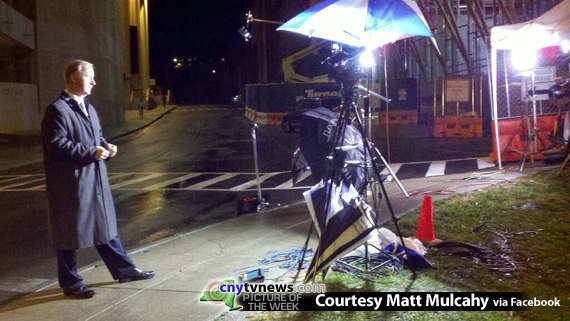 CNYCentral anchor Matt Mulcahy's normal prime time routine consists of anchoring the CW6 (WSTQ-LP) News @ 10, followed by co-anchoring on NBC3 (WSTM) at 11.  But on Tuesday night, he was live outside the Carrier Dome following SU's home game against Eastern Michigan.

It was the team's first game -- and Boeheim's first postgame press conference -- since Fine was fired by Syracuse University on Sunday... so the media pool was much larger than usual.  Mulcahy posted this shot on Facebook just a few minutes before 11:00pm that night.  You can see part of the setup for another media outlet along the right edge of the photo.

Your editor isn't always lucky enough to be on Facebook at just the right time to catch photos like this one -- that's why we're always grateful for your photo submissions for future editions of Picture of the Week.  Whether it's a recent happening from your local radio or TV station, or a nice "blast from the past," send those shots via email or upload via the Contact Form.