SYRACUSE -- It's been more than two decades since Neil Presant left upstate New York for his current job in sales at CBS Radio in Tampa, Florida... but he hasn't forgotten the roots of his radio career.  Presant recently sent this photo he took on his last day working for the former "Light and Easy" 100.9 WEZG. 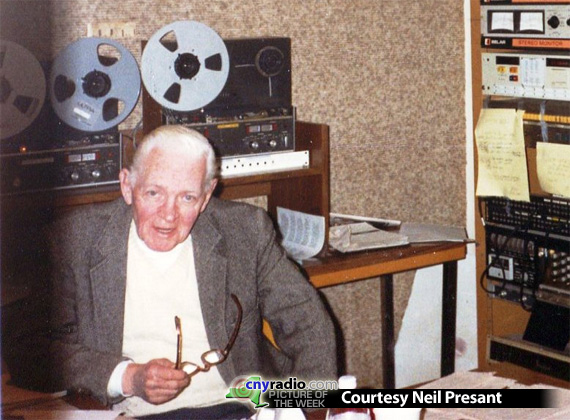 Presant says Syracuse broadcast legend Ed Murphy posed for this photo on Presant's last day at WEZG in November 1988.  Murphy did afternoon drive for the station, as a "retirement gig," after working at a number of AM stations like WOLF, WNDR and WSYR for the bulk of his career.

Presant shared his memories of life at WEZG in the late 1980s:

WEZG's format was "Easy Listening"...a mix of light and easy favorites in instrumental form (provided by  Bonneville Music). We also ran one "regular" song with lyrics every quarter hour. The Morning guy was Dick Mastriano. Barbara Gibbons did News, and subsequently was replaced by an up and comer, Amy Robbins, who went on to have (and continues to have ) a great career at 93 Q.

Middays was an older gent named Charlie Hobart. Charlie was a broadcast veteran in Syracuse for years. He had also done weekend weather at Channel 3 during the the 1980's. If he's still alive, he's gotta be in his 90's. In PM Drive it was Ed Murphy (the photo I sent). He was a radio and TV giant in CNY during the 40's-70's. He had worked at a number of AM stations ( I believe WOLF, WNDR, WSYR ) just to list a few. Probably TV as well.The gig at WEZG was his "retirement". What a great set of pipes.

At the time I was there, we also had an am sister station, AM 1220 WXRA. It was an automated station with the "Music of your life" format. A couple years while I was there, we also had the broadcast rights to the Syracuse Chiefs baseball team. I would also engineer the games back at the studio and do scoreboard updates. The voice of the Chiefs was Dan Hoard. Today, Dan is Radio voice of the Cincinnati Bengals, and University of Cincinnati Football and Basketball.

As for Presant himself, he got picked up for weekends at WEZG while attending Syracuse University, after ops manager Sam Brown caught Presant heard him doing a shift on student-run Z89 (WJPZ-FM).  He moved from weekends to morning sports, then later to the sales department.  At the time, WEZG was owned by Lorenz Broadcasting, which also owned WBLK in Buffalo.  Presant moved there for two years, then onto Tampa, where he's been ever since.

Just over 18 years ago, WEZG transformed to its present-day identity, K-Rock (WKRL).  A few years earlier, the AM station moved from 1220 to 1200, and today it's one of Galaxy's ESPN Radio CNY stations.

Our thanks to Neil Presant for a great look back at a piece of Syracuse radio history.  Of course, if you have your own memories to add, feel free -- by posting a comment below, either with your existing Facebook account or the original CNYRadio.com comment system (registration is free).

We're always looking for more photos!  Whether it's something recent, or a nice "blast from the past" -- as long as it has something to do with radio or TV in Syracuse, Utica or Ithaca, send it along and we'll feature it here.  Email cnyradio@cnyradio.com or upload via the Contact Form.  Accompanying stories are always welcome, but not a requirement.  There's a new Picture of the Week every Friday.