UTICA -- Typical "small market" TV stations are often described as "revolving doors" in the TV news biz... many rookie reporters just want to build a good resume tape and move to a bigger market.  WKTV, however, has long been an exception.  Quite a few staffers have called WKTV home for years, even decades.  Primary anchor Bill Worden just reached 35 years with the NBC affiliate. 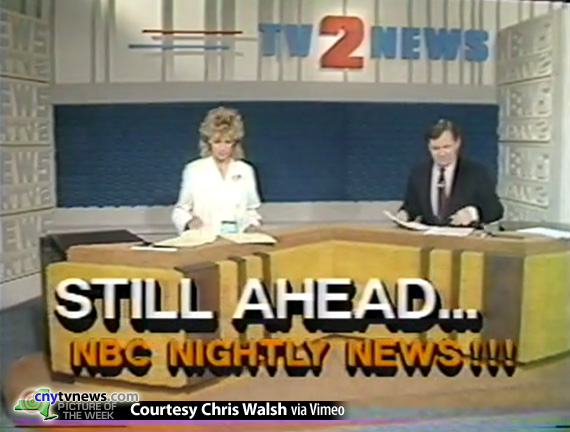 Here's Worden, at right, with an unnamed co-anchor on one of the old WKTV sets.  We don't know the exact date of this shot, aside from being confident it was prior to 1992, when "the gray set" and the "NewsChannel 2" branding did away with the previous "TV 2 News" branding from the days when WKTV was owned by Harron Cable.  The CG operator was apparently pretty excited about NBC Nightly News!!!

Update: On our Facebook page, Chris Walsh commented to let us know the co-anchor is Karen Huxtable, and this was the 6pm newscast from September 26, 1988.  Thanks, Chris!

We couldn't find anything about Worden's milestone anniversary on the WKTV website, and we're not sure if there were any on-air tributes.  This image comes from a video on vimeo.com... by chance, your editor happened to be on Facebook at the right time to catch someone sharing the link.  Of course, you'll see shots from the aforementioned "gray set" along with some field reporting, and a few promos shot in New York with Tom Brokaw, when he anchored Nightly.  You'll also catch a few quick shots including former WKTV anchors including Lynda Hammond and Dennis Williams.

WKTV's Chris Walsh, who produced the video, posted on Vimeo, "After 35 years of service I thought the least I could do was make a video for Bill. This is by no means a full career tribute, but there is video from every decade Bill has been at the station."

Our sincerest congratulations to Bill Worden!

Has it been awhile since your station has been featured in Picture of the Week?  We're always interested in a look at recent happenings -- or a nice "blast from the past" -- at your local radio or TV station.  We've got one lined up for next Friday, but there are many more Fridays to come... so send those snapshots to cnyradio@cnyradio.com or upload via our handy Contact Form.  There’s a new Picture of the Week every Friday.