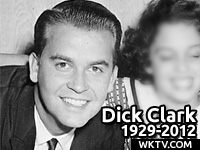 LOS ANGELES -- Broadcast personality Dick Clark, best known for shows like American Bandstand, the game show Pyramid and the annual New Year's Rockin Eve specials on ABC, has died following a "massive heart attack" this morning in California.  Clark, who was 82, made his very first appearances on radio and television in Utica, and graduated from Syracuse University.

While many Americans might believe Clark's career started with American Bandstand, broadcasters in Central New York know Clark's very first experience in broadcasting happened at WRUN radio in the mid 1940s.  The station was owned by his uncle, and managed by his father.  Although Clark started out in the mailroom, it wasn't long before he had the chance to read weather and news on the air.

In a 2008 story on CNYRadio.com, former Utica broadcaster Jeff Moulton recalled that Dick Clark himself, “actually told me his father would let him on the FM but not the AM because no one had an FM reciever back then.”  The station known as WRUN-FM back in those days is the 100,000-watt signal known today as WFRG.  (Not to be confused with the station currently using the WRUN-FM call letters.)

According to a profile posted on the website of NBC affiliate WKTV, Clark earned a degree at Syracuse University in 1951 and worked at WOLF (then a country music station) for a short time.  He eventually returned to WRUN, where he went by the name "Dick Clay" on-air, eventually making the jump to television at WKTV.

The NBC affiliate atop Smith Hill says Clark hosted a show called Cactus Dick and the Santa Fe Riders, described as "a country music program which became perfect training for his later television jobs... one of those was Clark's very next job in Philadelphia, where he launched the local show Bandstand, the show which eventually became American Bandstand when it aired nationwide on ABC from the 50s through the late 80s.

Clark is also known for hosting the various incarnations of Pyramid which ran for more than 25 years on CBS and ABC, and most-recently, for being live in Times Square to ring in the new year for all but one of the past 39 years.  Clark's only absence came in 2004, when he was recovering from a a mild stroke.  Regis Philbin filled in that year.  Clark returned the following year, sharing host duties with Ryan Seacrest each year since.

One comment on “Broadcast Icon Dick Clark Dies at 82, Started Career in Utica”