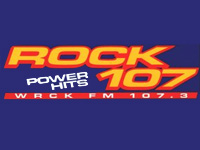 UTICA-ROME -- Do you own a rock station?  Would you like to legally identify it as WRCK, just like the former "Rock 107" did for decades?  After acquiring the heritage call letters in March, locally-owned Roser Communications moved them to from 100.7FM to 1480AM in Remsen, and the company is now reportedly entertaining offers to transfer the call sign elsewhere.

That's according to national radio industry trade site AllAccess.com, which traces the WRCK call letters back to Chicago, when they were used on 94.7FM, the present-day WLS.  Longtime Mohawk Valley residents may remember when "Rock 107" became WRCK in 1981, holding the call letters even as the top 40 station rebranded as "Hot 107" for a short time before flipping back to classic rock in the mid 90s.

Since then, EMF had moved the WRCK call letters to 100.7FM, the station Roser bought last month.  Roser made 100.7FM a simulcast of the news/talk/music format already branded as WUTQ, so it was a natural decision to change 100.7 to WUTQ-FM.  The WRCK calls were simultaneously "parked" at 1480AM in Remsen, formerly WADR.

Added 4/26 -- And our thanks to Budd "Money" Yeman for sharing these vintage WRCK logos with us.  We found the black-and-white one on his WTLB 1310 Tribute Page on Facebook, and he was kind enough to send us the blue and yellow one.  He also sent a few classic photos we'll share in a future installment of Picture of the Week!