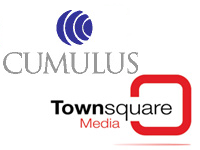 GREENWICH, CT -- No changes are expected at Cumulus radio stations in Syracuse, nor at Townsquare stations in the Utica-Rome market, following a major 13-market station swap announced this morning between the two companies. Just outside of the CNYRadio.com coverage area, the five-station Cumulus cluster will be going to Townsquare.

Cumulus referred to the markets as "non-strategic" in a press release issued today.  Later in the announcement, Cumulus said it's focusing on "stations in top markets and geographically strategic regional clusters."  The Binghamton cluster became part of Cumulus last year, when the Atlanta-based company acquired the former Citadel Broadcasting.

By contrast, a release from Townsquare quotes CEO Steven Price as saying, "we are excited to continue to add premier assets to our portfolio," calling the deal "an excellent addition" to Townsquare's portfolio.

Townsquare will give Cumulus $116 million in cash in addition to its clusters in Bloomington and Peoria, Illinois. In exchange, Townsquare gets the following Cumulus clusters:

Assuming the FCC approves, this deal (and a separate pending station sale in Texas) will bring Townsquare's portfolio to 244 stations in 51 markets, up from 202 stations in 43 markets. Cumulus currently owns about 570 stations; the deal will bring that total down to about 525.