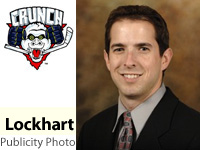 SYRACUSE -- As the Syracuse Crunch's playoff bid ended on Friday at the hands of the Ice Caps in St. John's, Newfoundland and Labrador, Canada, so did Jason Lockhart's two-season run as the AHL team's broadcaster.  Next season, Lockhart will be on the west coast, calling games for a different team in a different league.

Lindsay Kramer of the Syracuse Post-Standard, who reports (and Tweets) on the Crunch year-round, reported this evening that Lockhart has accepted "a similar job with San Francisco of the ECHL."  The league announced in September, that the San Francisco Bulls will be one of two expansion teams joining the league next season.  A notch below the AHL, the ECHL refers to itself as "the premier 'AA' hockey league."

Life on the west coast is nothing new for Lockhart -- prior to joining the Crunch in 2010, he had been working for the ECHL's Bakersfield Condors.  Before that, he spent a few years in the communications office of the NHL's New York Islanders.

On Twitter, Kramer said, "Lockhart was a true professional who put a lot of effort into his job. I'm sure all his listeners wish him well."  When a follower asked if the Tampa Bay Lightning -- rumored but not confirmed to be the Crunch's new NHL parent club next season -- was "bringing in their own guy," Kramer said the Crunch will make that decision.

No word yet from the Crunch on a replacement for Lockhart.  For the past two seasons, all Syracuse Crunch games have been broadcast on The Score 1260 (WSKO) and in a separate deal going back even further, a select number of games have been telecast on Time Warner Sports.