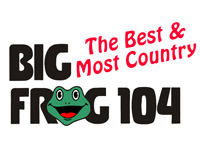 UTICA-ROME -- Country music star Josh Thompson will know Central New York fairly well by mid-June: a week before he's scheduled to appear at the State Fairgrounds in Syracuse, he'll be performing at Frogfest for Utica-Rome country station Big Frog 104 (WFRG).  Out of 24 years of Frogfests, this will be the second-ever to charge admission, a change which started last year, as the station added a rodeo to the concert.

Thompson will be sharing "headliner" status with Easton Corbin.  According to the station website, the Painted Pony Rodeo will be back, and it'll be bigger than last year.

Tickets are $18 in advance and $25 the day-of, but kids under 10 get in for free.  WFRG is also offering "VIP Experience Tickets" for $50, including access to dedicated parking areas, a special entrance, a VIP bar, a free t-shirt, free food and non-alcoholic beverages, and a special bank of porta-potties.  Tickets are on-sale at local Price Chopper locations, the Herkimer County Fairgrounds and at the Townsquare Media studios in Marcy.