Utica's 92.7 The Drive to Assist with July 4th Fireworks 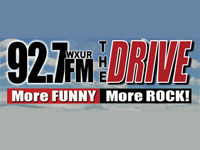 UTICA-ROME -- Officials from locally-owned 92.7 The Drive (WXUR) say they're excited to be "stepping up" this year to provide "an assisting capacity" for the City of Utica's Independence Day parade and fireworks show.  As has been the case since 2009, the fireworks will be launched over Proctor Park.

WXUR program director Tom Starr tells CNYRadio.com the Independence Day Parade will start at 6pm at the Armory.  The parade will head north along Culver Avenue to Rutger Street, and into Proctor Park.  Starr says WXUR and the city are cooperating to make "food, beverages and family-friendly activities" available "right after the parade" until the fireworks go off at dusk.

Entertainers interested in performing in Proctor Park between the parade and the fireworks display should send their contact information to feedback@927thedrive.net and someone will be in touch.

As for the parade itself, organizations and businesses who want to take part should contact the City of Utica directly at events@cityofutica.com.

If you're just planning to take in the sights, Starr says free shuttle service will be provided to and from parking at the Charletown complex, just around the corner from Proctor Park on Bleecker Street.