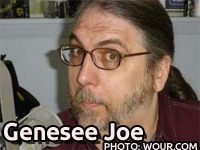 UTICA-ROME -- June is a special time of year for "Genesee Joe" Trisolino.  He says he's not sure of the exact date, but another June means another anniversary with heritage classic rocker 96.9 WOUR, and this year in particular is especially notable: it's his 20th anniversary with the station.  Joe reminded us of the milestone late last week and we took the opportunity to ask him for some reflections on the past two decades.

Genesee Joe started with 96.9 WOUR in 1992. Today, he says there's nobody else at the station who was there when he started. In addition to his weekday afternoon drive shift, he fills out the rest of his workday with some production duties.

What do you remember about your start at WOUR? Who hired you? (Where are they now?) What was your first shift?

When I first started it was mainly for call out research, overnights and remote set ups. Eventually I moved into overnights and weekends and began
doing overnights and staying on to work with the morning show. In 1996, I moved to the night show and to afternoon drive in 2008. I was hired by Peter
Hirsch. I hear he's in Florida now.

Editor's Note: We found Peter Hirsch's profile on LinkedIn, where he says he moved from Florida to North Carolina last September.

Do you have an especially memorable or favorite interview with an artist or other celebrity?

My first big interview was with Eddie Money on a Saturday afternoon. It was cool because he remembered me when he was back in town. But my favorite interview was with Warren Haynes. I had to pick him up and bring him to the station and then bring him back to do his soundcheck. Two big highlights for me other than that were interviewing and meeting Bob Weir of the Grateful Dead and Jorma Kaukonen & Jack Casady of Hot Tuna. Also meeting and introducing the Levon Helm Band was great. I love when an artist I have been listening to all my life comes back around and remembers me... like hot tuna or Warren Haynes.

Do you have an especially memorable or favorite "blooper" from your 20 years on-air?

Would you be able to name a single "proudest moment" or best achievement from your career?

There's another hard one to answer. I think back to when I was growing up in Utica and listening to WOUR... there was always some one, Peter Hirsch, Tom Starr, Jerry Krauss. Some constant personality you could relate to. What makes me proud is when someone lets me know I'm that guy for them. I had a birthday party once and a young guy came up and told me he'd been listening to me since he was six. That was cool, knowing youre a part of people's
lives.

If there were any musician you could interview on your show today, who would it be?

What would you consider to be the most important change (or changes) in radio over the past 20 years?

Computerization of on air & production capabilities. Computers have added greatly but at the same time fueled the worst changes to radio. Alot of the bad things in the industry are due to the computer age in radio. A positive aspect is web sites and social networking sites like Facebook. Where else can you put something out and get immediate response?

Where do you see radio, as a whole, headed in the next 20 years?

I think classic rock and its fans will always have a place on the air. Just like my parents' music, standards, etc. have stood the test of time. I hope to be 70 doing a classic rock show somewhere, ya know, like some of the other guys who worked into their golden years. A show where you take callers who wish their grandkids a happy birthday, 50th anniversary stuff, maybe share a listener's favorite recipe and then intro Black Sabbath. LOL!

Our congratulations again to Genesee Joe on 20 years with WOUR, and our warmest wishes for many more!