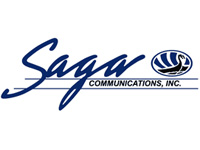 ITHACA/CORTLAND -- All eight of Saga's radio stations in Ithaca, marketed locally as the Cayuga Radio Group, can currently be streamed online.  But by the end of next month, it appears those streams will be gone, according to reports from some national radio trade publications.

As far as we can tell, Inside Radio was first to break the story -- you'll need a subscription to view their full story, but even without a login you get the bullet points: the company says its stations aren't getting enough online listeners to justify the rising cost of streaming.  As a result, streams in any market below the top 100 will be terminated in July.

The Ithaca/Cortland market hasn't been rated by Arbitron since 2009, but prior to that time, the market was ranked #285 in the nation.  For comparison's sake, Arbitron ranks the Syracuse market at #85 and Utica-Rome at #166.

The free Radio and Internet Newsletter (RAIN) shares more details from the original Inside Radio story.  According to RAIN's synopsis of the original material, Saga racks up about $800,000 in streaming expenses per month, and most of that goes to SoundExchange to cover the cost of music royalties.

In addition to pulling the plug on smaller markets, RAIN says Saga has other plans to further reduce streaming costs.  Specifically, the company may employ technologies to limit streams to listeners within a station's regular listening area.  There could also be a "timeout" function where, after 90 minutes of streaming, the listener must verify they are still there.  This can help the company save an estimated 8% by terminating streams to listeners who really aren't.

If the decision turns out to be a mistake, Saga CEO Ed Christian is quoted as saying "we can always re-establish streaming at any point in time and have everything back up in a week or two."

Thanks to CNYRadio.com reader Brendan who spotted the original story and passed along the word.  Anytime you hear of news we haven't reported yet, we're always grateful for your news tips at cnyradio@cnyradio.com or use the Contact Form.