"Wheel" and "Jeopardy!" Move to Fox 68 in September 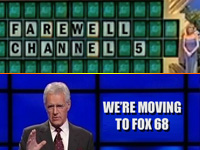 SYRACUSE -- If you're among the few holdouts that still think of Fox as the "fourth network" in television, this might turn your head: after many years on CBS5 (WTVH), highly-rated syndicated game shows Wheel of Fortune and Jeopardy! are moving to Fox 68 (WSYT) this fall.

Fox 68 has already been running promos about the move, but with many shows on hiatus for the summer, viewers may not have noticed.

Management tells CNYTVNews.com that the move takes effect on Monday, September 17.  Not only is Fox 68 taking over the affiliation, but it says Syracuse viewers will get to see hosts Pat Sajak, Vanna White and Alex Trebek "for the first time, in crisp and clear HD," indicating that CBS5 had been running the shows in the same "enhanced widescreen" format it uses for local newscasts.  (Although enhanced widescreen is not HD, it can be hard to tell the difference.)

Fox 68 says it will keep both shows in same timeslots they've enjoyed on WTVH for years -- with Wheel of Fortune at 7:00pm, followed by Jeopardy! at 7:30.  The Sinclair-owned station will also add Saturday broadcasts of both shows, at 6:00 and 6:30pm.

On a side note, we'll take a moment to wish Jeopardy! host Alex Trebek a speedy recovery after suffering a mild heart attack over the weekend.  Reports say he should be ready to work when tapings for the new fall season of Jeopardy begin next month.  Although many affiliates air Jeopardy at 7:30 in the evening, the show was just named "best game show" for the 13th time at the Daytime Emmys on Saturday.

Stations Mum About Other Lineup Changes

No word yet on how WTVH will fill its "access hour" after Wheel and Jeopardy! make their move from 1030 James Street to 1000 James Street.  CNYTVNews.com reached out to management at CNY Central (WTVH/WSTM/WSTQ), as well as ABC affiliate NewsChannel 9 (WSYR-TV) to request a full listing of local and syndicated timeslot changes for the coming season, but after waiting more than 24 hours, we received no responses.

We also asked Fox 68 if it, or co-located My43 (WNYS-TV) were planning any other changes, but they did not comment on anything beyond Wheel and Jeopardy!  If and when we learn more, we'll keep you posted.