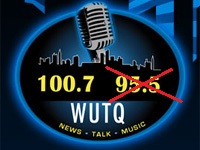 In addition to a program syndicator who (perhaps unintentionally) confirmed the changes, we first heard from two different CNYRadio.com readers, who requested not to be identified in the story, but who are both regarded as trusted sources.

Our first source told us the three stations were looping the theme song from TV's "The Jeffersons," along with announcements alerting listeners that most of the news/music/talk programming is "moving on up" to 100.7FM exclusively. The only exception remaining the other three stations, according to the tipster, would be the weekend specialty programming -- which, according to the schedule on WUTQ-FM's website, will only be on the "other" three stations, allowing WUTQ-FM to maintain its AC music format all weekend.

The source told CNYRadio.com, "Roser is supposedly LMAing the two AM's and the FM translator to some former WKTV employees" who had exited the station within the past few months, ans goes on to hint that the new format "might give [ESPN Radio and Arjuna's WNRS] a run for listeners."

Another source provided more in the way of specifics, telling CNYRadio.com that the three stations will feature a sports format, and one of the principals will be former WKTV program director Tom Coyne, who exited the NBC affiliate in January after 17 years. That makes sense, given Coyne's background in sports. At WKTV, he blogged about local sports and occasionally filled-in as a sports anchor. Prior to joining WKTV, he hosted SportsWatch on WIBX and served as sports director at WUTR in the 1970s.

The other name we've heard is Frank Abbadessa, who was a station manager at WKTV the last time we had heard from him, ironically, confirming Coyne's exit for CNYTVNews.com. Given the recent promotion of Steve McMurray to the station manager title, it seems reasonable that Abbadessa -- whose expertise lies in broadcast sales -- could be working with Coyne on the new format.

A tip of the hat to Scott Fybush from NorthEast Radio Watch, who told us he found an announcement from a program called Wrestling Observer Live, announcing it would be adding "three new over-the-air broadcast affiliates" next weekend. The article says the show will air in "Utica, New York on WUSP-FM 95.5, WUSP-AM 1550 and WADR-AM 1480." Although this particular program will only fill two hours on Sunday afternoons, it falls in line with the tips we've received on the format change.

We won't nitpick about the fact that 95.5FM is a translator, and as such, the call sign is W238CA (not WUSP-FM), but it's definitely the first we've heard of the new call letters, which could be legal for the AM 1550 signal. As of Sunday night, the station is still officially registered as WUTQ, but the FCC's call sign reservation system shows Roser filed for the WUSP calls on Thursday, July 19.

Observant followers of local radio might recall WADR changed to WRCK in April... but this time, it appears Wrestling Observer Live made an error and isn't uncovering any other surprises -- the FCC call sign database shows the WADR call letters are still freely available to any eligible broadcaster who might request them.

No word yet on any other programming specifics, but one of our sources say the WUSP team is allegedly planning to include some locally-produced programming on the lineup. We're not sure yet if that means a local talk show, live play-by-play coverage or a combination of the two. We'll also be curious to see which network (if any) will be filling any "holes" in the program schedule. With ESPN already taken by Galaxy's WTLB, WIXY, WRNY and (soon) FM translator 99.1, and Fox Sports airing on Arjuna's 1420 The Fox (WNRS), it seems the only option would be Yahoo! Sports Radio. A new CBS Sports radio network announced last month doesn't launch until January.

While checking things out for this story, we noticed that WUTQ-FM has two notable names on its weekend roster. Linda Rae is handling Sundays from 9am to 3pm, after having been absent from radio (except for voicing some spots here and there) for the past few years. Prior to her current full-time job outside of radio, Linda Rae worked at Clear Channel, where she was morning co-host at Kiss-FM, and for awhile just before Clear Channel exited the market, she was also PD and midday host of Mix 102.5. Updated:  And handling the 3-7pm shift on both Saturdays and Sundays is Brian Ocean, who ops manager Dave Silvers points out, is NOT to be confused with a local netcaster of the same name.

Our thanks to everyone who provided the information to help us piece this story together. Anytime you've got news to share from your station, drop us a line at cnyradio@cnyradio.com or use the Contact Form. Either way, make sure to let us know if we can attribute the details to you on-the-record, or if you'd rather remain anonymous. When you use the Contact Form, your name and email are optional -- we'll still get the message even if you leave those first two fields blank.