UPDATE: Fox 68 and My43 Remain on Dish Network Lineups 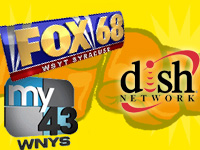 SYRACUSE -- Although Sinclair Broadcast Group and Dish Network failed to agree on a new "permanent" retransmission deal before the old one expired overnight, Fox 68 (WSYT) and My43 (WNYS) remain available on the satellite provider's lineups.  The two sides have extended the old deal for two weeks as they continue to hash out a new contract.

The official notice on Fox 68's website reads as follows this morning:

Sinclair Broadcast Group is pleased to announce that it has reached agreement in principle with Dish Network on a new retransmission consent agreement and has entered into a two week extension of its existing agreement in order to allow the parties to work toward a final agreement. We thank our viewers for their patience and support during these negotiations.

As reported here yesterday, the two stations were among about 70 Sinclair-owned or controlled stations nationwide which were due to disappear from Dish Network lineups overnight.

Earlier this week, Dish Network publicly accused Sinclair of demanding retransmission fees which were higher than any other broadcast operator in the country.  Dish claims, if it took Sinclair's offer, it would have to pass those increased costs along to subscribers.  Sinclair fired back, claiming the amount it requested is still lower than what Dish pays for various low-rated "cable" channels, though Sinclair didn't name names, and neither side mentioned any specific amounts.

So, if you're a Dish Network customer who enjoys watching Fox 68 or My43, re-set your countdown clocks for 12:01 a.m. on August 30.  That's when this new two-week extension on the previous retransmission agreement will expire.