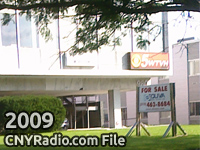 SYRACUSE -- The former WTVH building on James Street has been on the market for nearly three and a half years.  A giant, yellow "For Sale" sign is meant to attract would-be buyers, but instead, police say it recently attracted some copper pipe thieves.

CNY Central's Michael Benny reports Syracuse Police confirmed a break-in at the 980 James Street building, "sometime between August 10-14."  According to Benny's story, thieves "attempted" to steal copper pipe.  In the process, they also caused some flooding damage, by cutting a pipe that still had an active connection to the city water supply.

WTVH's owners entered into a joint services agreement with the owners of WSTM and WSTQ-LP in 2009, forming "CNY Central."  As part of the agreement, all of WTVH's operations were moved into the WSTM building up the street.  Soon after, the building was put up for sale.  The building is now completely vacant, but Benny reported, "prior to the crime, two staff members were regularly using the upstairs offices," which perhaps explains why the severed water line was still active.