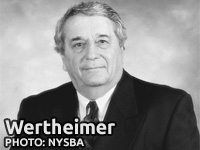 SYRACUSE -- Earlier this week, we shared with you the sad news of the passing of former radio station owner Albert "Bud" Wertheimer. Today, the family is announcing plans for a memorial service at Syracuse's Landmark Theater next week.

According to an obituary in today's Syracuse Post-Standard, the memorial service will be taking place next Wednesday, September 5, at 1:00pm. Family members will greet friends and a reception will follow.

The obituary also includes a detailed account of Wertheimer's career in broadcasting, one that earned him a spot in the New York State Broadcasters' Association Hall of Fame in 2007.  Wertheimer was best known for co-founding The Lincoln Group in 1978, eventually growing to include several stations in Rochester, Buffalo and eastern Ohio.

Earlier this week, Scott Fybush of NorthEast Radio Watch recalled Wertheimer's earlier venture, as the region's Musak franchisee, led to the launch of WDDS, one of the first FM stations in Syracuse. Today, a few decades and a few owners later, that station is known as 93Q (WNTQ).