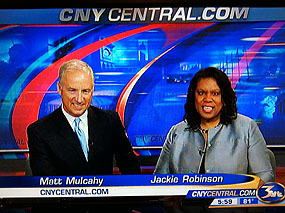 Updated 10:20pm with video -- SYRACUSE -- Looking at the current slate of television news reporters and anchors in Syracuse, we can think of only a couple of people who can say they've been at the same station for 34 years.  And tonight, that very select class is smaller by one, as Jackie Robinson retired from her decorated career with NBC 3 (WSTM).

Most of WSTM's 90-minute early evening newscast was devoted to reflecting on Robinson's career, her first and only night back at the anchor desk after being notably absent during most of last week.  It's rare to see local TV anchors "off" during the New York State Fair, and it wasn't until Friday that Robinson's retirement was announced.

The newscast featured an interview conducted by co-anchor Matt Mulcahy, in which Robinson reminisced on her start at channel 3, first as a newsroom secretary and a reporter, before becoming weekend anchor in 1985, and primary evening anchor five years later.

In 1992, a standardized test asked eighth-graders to write about a historical figure.  Students were required to choose from a list of names, including Jackie Robinson.  Though the New York State Board of Regents had expected students to write about the legendary baseball player of the same name, more than a hundred local students wrote instead about the news anchor.  The students were given credit for a correct answer and Robinson was named an Outstanding African American of Distinction by the Governor.

Going into commercial breaks, the station played clips of viewers who stopped by CNY Central's booth at the State Fair to share memories of watching Robinson on TV and to wish her well in her retirement.  The station also aired a statement from CBS Evening News Sunday anchor Jeff Glor, a former co-anchor of Robinson's, current SU men's basketball coach Jim Boeheim, and former SU football coach Dick McPherson.

During the 5:30pm newscast, Chief Meteorologist Wayne Mahar offered Robinson some "sunshine" in the form of a sunshine-themed balloon (it was cloudy and rainy today in Syracuse).  During the 6:00 half-hour, co-anchor Matt Mulcahy gave his co-anchor a bouquet of flowers.  Later in the show, Mulcahy presented a dual proclamation from the City of Syracuse and Onondaga County declaring today to be "Jackie Robinson Day" in the city and the county.  She humorously remarked, "wish I had known that getting up this morning."

Michael Benny even managed to duck out of his own newscast in the CBS 5 (WTVH) studio next door to spend a few minutes with Mulcahy and Robinson.  He interviewed some CNY Central staffers who've been around even longer than Robinson, including Jim Kenyon and Laura Hand.

For the final segment of the newscast, dozens of staffers and Robinson's husband surrounded the anchor desk, looking on as she offered her closing remarks, thanking viewers, her co-workers and her family for their support over the past 34 years.  She wrapped up with her trademark sign-off, "Goooooooodnight, Central New York!"  Co-workers presented her with a cake (with her photo printed on it), a champagne toast, and other going-away presents.

Here's a video of that final segment, as posted on YouTube by CNY Central on Tuesday night:

Love this - Boeheim on @cnycentral's Jackie Robinson: "I'm a known critic of the media, but there's no one better than you."

Jackie Robinson on campus @cnycentral going thru scrapbook with @mattmulcahy for retrospective on historic career twitter.com/MichaelBenny/s…

Is there anyone in Syracuse watching 9 or YNN tonight? All eyes have got to be on the goodbye to @cnycentral's Jackie Robinson.

Jackie Robinson' sign off from @cnycentral. 34 years. We will miss her. twitter.com/WayneStormWatc…

Missing the newsroom a bit tonight as @cnycentral says goodbye to a local legend. Enjoying the wishes and retrospective for Jackie Robinson