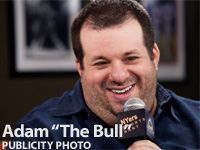 UTICA-ROME -- It's been a little over a year since former Utica-Rome sports radio host Adam "The Bull" Gerstenhaber started his current job at 92.3 The Fan in Cleveland.  Gerstenhaber said he's really enjoying the job, in a recent interview with Don Laible of the Observer-Dispatch.

The interview was the basis of a two-part series Laible published over the weekend.  In part one, from Saturday, Laible provides a recap of Gerstenhaber's path from Utica-Rome (market #164) to hosting an afternoon drive sports talk show, with a former NFL player as a co-host, in Cleveland (market #18).

"The Bull" worked in the #1 market at New York City's legendary, 50,000-watt WFAN in between, and Laible's story includes some details about how Gerstenhaber benefitted from working alongside such greats as "Mike and the Mad Dog" and Rich Sommers.  But the schedule at WFAN as a part-timer was not steady.  The offer from Cleveland provided full-time status and a more stable schedule of employment.

On Sunday, in part two of the interview, Gerstenhaber told Laible that his favorite part of working in Utica wasn't hosting SportsWatch for WIBX or his own show on the former SportsStars Network -- but rather, he most enjoyed doing play-by-play for Utica College.  Today, Gerstenhaber says, "it would be fun" to do play-by-play again, "but I love hosting my show."