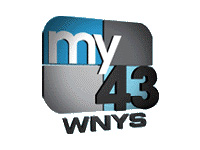 SYRACUSE -- Although there are several options on cable and online for watching music videos, fans who prefer to get their music video fix on free broadcast TV are out of luck, after "The Cool TV" network recently disappeared from WNYS-TV digital subchannel 43.2.

WNYS, which carries "MyTV" network programming on its primary channel, stopped carrying the music video network on August 31.  The channel now displays a plain blue screen, with a message stating "Sinclair Broadcast Group is no longer carrying Cool TV on this channel."

According to NorthEast Radio Watch (which is free this week, even if you don't subscribe), "Cool TV" was pulled from all 32 affiliates owned or operated by Sinclair Broadcast Group on August 31. WNYS-TV is owned by RKM Media, but operated by Sinclair. WNYS and Sinclair-owned Fox affiliate WSYT share facilities and staff on James Street in Syracuse.

General Manager Dan O'Connor tells CNYTVNews.com he's not sure whether this is a temporary outage or if something else will take over on subchannel 43.2. "It's all corporate, based on the relationship between Sinclair Broadcast Group and Cool TV," O'Connor said. "We have no [involvement] here at the local level."

According to a Wikipedia list of current and former affiliates of The Cool TV, losing Sinclair's 32 stations leaves the music video network with just 16 affiliates nationwide, with Albany Fox affiliate WXXA 23.2 as the lone affiliate in New York State. The list says WNYS 43.2 had carried The Cool TV programming since 2010.

Although Sinclair has not issued any statements regarding its reason for dropping the network from its 32 digital subchannels nationwide, several message boards point to The Cool TV's reputation for falling behind on payments to its affiliates in the past.  In 2011, Journal Broadcasting Group sued The Cool TV for $257,000 the music video network allegedly owed to Milwaukee affiliate WTMJ.