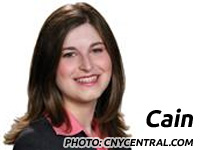 SYRACUSE -- September started with some notable "comings and goings" in local TV news, and the month appears to be ending with more changes.  After two and a half years with CNY Central, multimedia journalist and anchor Jessica Cain says she's leaving her post and heading to the midwest.

Cain tells CNYTVNews.com that this Friday will be her last with CNY Central, the combined effort of NBC3 (WSTM), CBS5 (WTVH) and CW6 (WSTQ-LP).  She and her fiance are moving to St. Louis, Missouri, where he just started a medical residency.

"I've always dreamed of reporting and anchoring in my hometown," the Camillus native told us.  "I'm so grateful to have had this opportunity."

Cain joined CNY Central in 2010, after three years of reporting and anchoring at CBS affiliate WWNY in Watertown.  Cain shared some reflections with CNYTVNews.com:

I've been fortunate to cover some amazing stories during my time here, from the serious ones, like a series and phone bank to raise awareness about organ donation, to the fun ones, like being "rescued" from a frozen lake and learning Tae Kwon Do. However, the people I have met are what I will remember the most. Co-workers, friends, family members, interviewees, and viewers have been wonderful to me.

CNYcentral is losing a good weekend anchor this week. Sad to see Jessica Cain leaving later in the week. Her upbeat personality, professionalism and great smile will be missed. Best of luck to Jessica in her future career path & upcoming wedding!

Before making her on-camera debut up north, Cain got her start behind-the-scenes as an assignment desk assistant at NewsChannel 9 (WSYR-TV), while still attending SU's Newhouse School of Public Communications.  She later became a producer, helping to launch the ABC affiliate's weekend morning newscasts.  During her final year at NewsChannel 9, Cain also picked up reporting duties at WSYR radio.

In addition to her current duties at CNY Central, Cain has been serving this year as Third Vice President for the Syracuse Press Club.

We wish Jessica and her fiance all the best, and she invites colleagues and fans alike to stay in touch via social media.  She says, "I plan to update everyone on my new adventures on my Twitter (@JessicaCainNews) and Facebook pages, so anyone can feel free to friend or follow me!"

While we're on the topic, check out our Twitter lists -- we'll be moving Jessica from our @CNYRadio/TV-people list to our @CNYRadio/CNY-Alumni list.  By following any of our lists, you'll automatically follow everyone we've added to the list... and if you believe you belong on one of our lists but we missed you, please let us know!