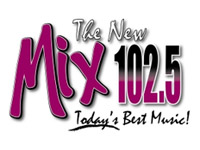 UTICA/ROME -- For the past three years, Mix 102.5 (WUMX) has been programmed by people who already have other duties at Syracuse-based Galaxy Communications. Now, "it's time for Mix to have its own PD," says VP/Programming Mimi Griwsold. She's taking applications for the job, which will include on-air shifts.

The job was posted Tuesday on AllAccess.com and Griswold has asked us to share it on CNYRadio.com as well:

WUMX, MIX 102 .5 in Utica-Rome, NY seeks an experienced Program Director. MIX 102.5 is a growing HOT AC anchored by Elvis Duran in the morning. The target demo is a blend of trendy and fast-paced singles and new families. We’re looking for passion for the lifestyle and the music that drives this station. Scheduling the music and imaging the station is the groundwork. We are also looking for someone with a keen ability to churn out creative, interactive promotions. The right candidate will also have both social media smarts and street skills. Good pipes, too as this position includes an on-air work. No consultant or corporate programming clown to deal with! MIX 102.5 is locally owned and operated by Galaxy Communications. If you have Programming experience, email your materials to:mgriswold@galaxycommunications.com. Galaxy Communications is an Equal Opportunity Employer.

As for the on-air duties, Griwsold says she has "no particular shift in mind" for the eventual hire at this point. She said she might even "shorten up current shifts with [middayer] Steve Kelley and [afternoon host] Rick Gary and create a shift between them."

For the past year, Griswold says WUMX programming duties have been handled by Nixon, whose primary focus is on programming the company's K-Rock stations in Syracuse (WKRL/WKRH) and Utica (WKLL). Before that, Griswold had been programming WUMX herself, in addition to other VP duties, which include programming classic rockers TK99/105 (WTKW/WTKV) in Syracuse and 96.9 WOUR in Utica. She says she's looking forward to restoring the position, "rather than other PDs doing double duty."

CNYRadio.com and CNYTVNews.com are pleased to share the word on employment opportunities at broadcast outlets within our coverage area. It's a FREE public service to both employers and job seekers, and it's one more recruitment source you can add to your station's FCC public file reports. Send your job postings to cnyradio@cnyradio.com.