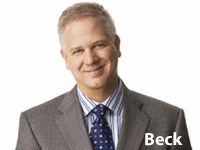 LODI -- Aside from his daughter getting married, Glenn Beck has another reason to remember his trip to the Finger Lakes this past weekend.  The nationally-syndicated radio host's SUV slid down a slippery hill, just moments after his wife and son got out of the car.

According to TheBlaze.com, the vehicle was parked on a hill outside of a cottage Beck and his family were renting in Lodi, Seneca County.  Just moments after Beck's wife took their son out of the SUV, it started to slide down the hill.  According to the report, Mrs. Beck's hand was still on the door handle.  She started screaming and Glenn yelled to her to "let it go," knowing there was nothing she or anyone else could do to prevent the vehicle's descent.

The car barrel-rolled down the hill several times.  Several photos on The Blaze.com show the car was covered in sizeable scratches and dents by the time it came to rest.

On his radio show, Beck recounted the story, adding that a member of his security detail went after the car, thinking Beck's son was still inside.  He was able to jump back out of the SUV before it started rolling.  Beck called the staffer a "hero."  After the incident, Beck said he was calm, and guided his family into the cottage to say their prayers and go to bed.