CNY Journalists Travel to Rome for Canonization of Marianne Cope 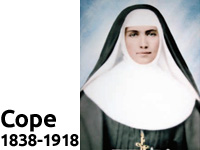 Updated 10/20 -- ROME, ITALY -- She was born in Utica in 1838 and, after joining the Sisters of Saint Francis, she helped establish hospitals which still stand today there, and in Syracuse. This weekend, Mother Marianne Cope will be officially canonized as a Saint by the Roman Catholic Church. Several local TV journalists have traveled to Rome to cover the ceremony. In addition to reports appearing on newscasts over the next few days, Syracuse TV stations are producing a total of three long-form programs to tell the story of Cope's journey to sainthood.

Then-Sister Marianne Cope helped establish St. Elizabeth Hospital in Utica in 1866, and St. Joseph's Hospital in Syracuse in 1869. According to a biography on blessedmariannecope.org, the two hospitals were among the first 50 "general hospitals" -- treating all patients without regard to nationality, religion or race -- in the United States. Cope, considered an innovator in healthcare methods, was asked in the early 1880s, to travel to the Sandwich Islands (or the Hawaiian Islands as they're called today) to take over management of their hospitals. She would spend most of the rest of her life there, working in various capacities to improve healthcare on the islands, particularly among patients suffering from Hansen's disease (leprosy).

Cope died in 1918 in Hawaii, at the age of 80. Her biography says, "The Sisters of St. Francis began collecting materials soon after Mother Marianne’s death for her eventual canonization." Nearly a century later, Blessed Marianne Cope will become Saint Marianne Cope this Sunday, when she is canonized by Pope Benedict XVI.

Also being canonized Sunday: Blessed Kateri Tekakwitha, a 17th-century Mohawk girl who converted to Catholicism and died at the age of 24. She'll be the first Native American to be granted Sainthood by the Church, more than 300 years after her death. The Auriesville Shrine, visible along the New York State Thruway between exits 27 and 28, was built on the site of the former Mohawk village where Tekakwitha was born in 1656.

According to Kerri Ganci, Director of Public Relations and Marketing for St. Joseph's Hospital Health Center in Syracuse, there are a total of eight Syracuse television reporters and photographers in Rome, along with a reporter and a photographer from the Syracuse Post-Standard.

CNY Central Teams Up with WCNY-TV

Anchor Matt Mulcahy and photojournalist Andy Wolf are covering the events for CNY Central, which includes NBC3 (WSTM), CBS5 (WTVH) and CW6 (WSTQ-LP). Several recent posts on the "Matt's Memo" blog have been devoted to the trip to Rome for Blessed Marianne's journey to sainthood. Mulcahy has already appeared live from Rome, and he will continue to file reports on TV, as well as on Facebook and Twitter.

Meantime, public broadcaster WCNY-TV sent Liz Ayers and Dave Fulkerson to Rome. Prior to the trip, WCNY invited viewers to join along (for just $3,050 per person) as part of a week-long group tour of Rome and vicinity.

Together, WCNY and CNY Central are developing an hour-long special, titled "Central New York's Saint: The Story of Marianne Cope." It's slated to air at the following dates and times:

ABC affiliate NewsChannel 9 (WSYR-TV) has sent anchor Dan Cummings and photojournalist Jim Kearns to the Vatican. The first report from Cummings aired earlier this evening. NewsChannel 9 is also working on an hour-long special which is set to air tomorrow night. "Saints Among Us" will air at 9:00pm, following a two-hour special taped live at the station's recent 50th Anniversary celebration.

On Sunday morning, digital channel 9.2 (Time Warner 890, Verizon FiOS 470, New Visions 23) will offer a live feed of the three-hour canonization ceremony. Due to the time zone difference, the broadcast will begin at 3:30am. If you're not looking to get up quite that early, it will be rebroadcast at 9:00am. The live broadcast will also be streamed online at at 9WSYR.com/Live, and in the NewsChannel 9 Mobile App.

YNN senior reporter Bill Carey and photographer Jim Gibbons are covering the events in Italy for Time Warner Cable's 24/7 local news channel, according to News Director Ron Lombard. He tells CNYTVNews.com that the pair filed their first report today, and will continue to file two more reports each day, through Sunday.

Carey and Gibbons have also been working on a one-hour special. Lombard says "The Saints of Upstate New York" will share with viewers "the personal history of both Mother Marianne Cope and Kateri Tekakwitha, and the long push for their canonization." The special will be telecast both Saturday and Sunday nights at 8pm on the YNN feeds serving Central and Northern New York and the Southern Tier, as well as the YNN-Albany coverage area.

Lombard says Time Warner Cable subscribers will definitely be able to watch it on EWTN. The Catholic network will air the Mass live at 3:30am Eastern, and it will be replayed at 11:00am.

Updated 10/20: Lombard tells CNYTVNews.com that YNN will be carrying the canonization Mass live, with English translation/commentary, courtesy of EWTN.  He tells us YNN will also stream the Mass live, sans commentary, at ynn.com, "for people who would like to see and hear it as people in the cathedral are experiencing it."