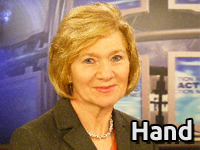 SYRACUSE -- Exactly forty years ago today, Laura Hand walked into the channel 3 newsroom for the very first time. Although much has changed in television news over the past four decades, Hand says she still hears one of the same questions that she's heard since her very first day with the NBC affiliate in 1972.

Back then, the station was still known as WSYR-TV (and 570 WSYR radio was there too, before the FCC nixed the since-repealed ban on TV/radio cross-ownership). And TV news was a male-dominated profession, much like the picture painted in the Will Ferrell movie Anchorman.

In a story on CNYCentral.com, Hand said the receptionist gasped at her when she walked through the stations' front door for the first time. "Women here don't wear pants," the receptionist said, something you wouldn't hear today, unless you were watching an episode of Mad Men.

But by that point, Hand didn't care what the receptionist thought of her wardrobe -- it was an accomplishment just to get in the door at channel 3. During her previous job in news radio, Hand said she'd often ask WSTM reporters in the field if there were any job openings. "We'll never have a woman in our newsroom," Hand recalls being told, time and time again. Despite such discouragement, Hand eventually got hired by channel 3.

In addition to her pantsuits, Hand wears many hats -- as a reporter, producer, anchor of Weekend Today in Central New York and as the station's community relations director. Outside of her workday at CNY Central, she serves on the Salvation Army's board of directors.

Four decades after that receptionist's gasp, Hand says she's still occasionally asked why she always wears pants. "The reason is, I never know where I'm going to be," Hand said in the story on CNYCentral.com. As an example, Hand remembered the day she had to climb nine stories of scaffolding for a story about ceiling repairs at a local church.

Hand says she has no plans to retire anytime soon -- but when she does leave broadcasting, she says she hopes to continue working in some capacity where her efforts will benefit the community.