WKTV Likely to Soon be Smith Media's Only Property 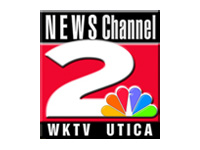 Updated 3:30pm with new information from management -- UTICA -- Within the past decade, WKTV parent company Smith Media LLC owned nearly ten television stations, located in Vermont, New York, Alaska and California. Over the past few years, the company has whittled its holdings down to just four stations... and if two recently-announced deals are completed as proposed, Smith Media's portfolio will consist of just one station: WKTV.

Thanks to observant CNYTVNews.com readers who spotted Smith's recent deals in other markets:

Pending FCC approval of the Burlington deals -- there are no obvious factors that could block the deals -- Utica NBC affiliate WKTV will be Smith Media's only remaining property.

Will Smith Media, LLC -- which itself has a parent company, a private equity firm named Boston Ventures -- continue to exist for the sole purpose of operating WKTV on a long-term basis?  A spokesperson for Boston Ventures told CNYTVNews.com, "I don't think we're going to comment" on our questions about the futures of Smith Media and WKTV.

Another question that comes to mind: What's in store for WKTV General Manager and Vice President Steve Doerr? He currently splits his time between Smith's properties in Utica and Burlington. It's an arrangement that's been in place since 2008, when Vic Vetters held the job, and it continued with Doerr after Vetters left in 2011.

Obviously, the sale of WFFF and WVNY will bring an end to the dual-market position, so will Doerr stay with Smith, move to Nexstar, or exit altogether?

New since this story originally appeared, Doerr has graciously provided some answers.  (And our thanks, by the way, to an insider who provided a "better" email address than the first one we used to contact Doerr.)

Doerr confirmed for CNYTVNews.com that he will be exiting the two Burlington/Plattsburgh stations when the sale to Nexstar/Mission closes.  He says he notified staff at WFFF and WVNY of his plans earlier this week.  The exact date of Doerr's exit depends on FCC approval of the sale, but he expects it'll happen early in 2013.

Additionally, Doerr confirms that he'll be staying with Smith Media, focusing on WKTV.  He said Smith Media has no plans  to sell or otherwise cede its control of WKTV.

A Brief History of WKTV Ownership

Smith Television acquired WKTV in 1992, after the FCC revised its cross-ownership regulations, forbidding Harron Communications from owning both WKTV and the cable company which served Utica and its suburbs at the time.  Harron chose to stick with the cable company (which was later sold to Adelphia, and to current owner Time Warner), selling WKTV to Smith Television.

After owner Robert Smith died in 2005, the Smith Family sold the company to Boston Ventures, who renamed it as Smith Media, LLC.

WKTV's main studio is named after Paul Harron, who owned the station from 1958 (buying it from the original owners, the Kallet family) until 1992.