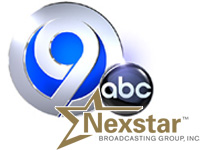 Updated 12/5 at 7:50pm -- SYRACUSE -- There's new information about the NewsChannel 9 (WSYR-TV) back office layoffs we first reported on Monday, and apparently some additional layoffs involving the ABC affiliate's newsroom.  Trusted sources, speaking on a condition of anonymity, tell CNYTVNews.com that the station dismissed all part-time photographers yesterday.

As of Wednesday morning, still no response to our questions submitted Monday to local management at WSYR-TV's East Syracuse offices, or with corporate-level management at Nexstar Broadcasting Group.  The Irving, Texas-based company announced its plans to buy WSYR-TV and nine other stations from Newport Television in July.  The $225.5 million deal closed over the weekend and was officially announced on Monday.

Earlier this week (original story below), we reported that Nexstar notified all employees of WSYR-TV's accounting, traffic and human resources departments that their jobs would come to an end shortly after the New Year.  New today, we hear those functions will now be handled in Rochester, where Nexstar has owned CBS affiliate WROC-TV since 1999.

We also reported that two top-level managers were given notices as well.  We now have heard from enough sources to report those managers include program manager Vince Spicola, who has been with channel 9 since the mid 1980s, and chief engineer John King, who has been with the station even longer.

Added 7:50pm -- We've learned that Nexstar has also informed employees that the newsroom's subscription to the Associated Press news wires will not be renewed when the current deal expires in March.  Again, no "official" confirmation from management, but we've heard that other Nexstar stations also make do without the AP wire.  Losing the AP wire also likely means losing AP's popular ENPS newscast rundown and script software -- meaning WSYR-TV will likely have to switch to a competing newscast building platform, such as iNews, which we hear is already in use at Rochester's WROC-TV and Utica's WUTR.

SYRACUSE -- Closing on a deal that was first announced in July and approved by the FCC in October, Texas-based Nexstar Broadcasting is now in control of NewsChannel 9 (WSYR-TV).  Although there appear to be no immediate major changes to the on-air product, multiple readers have told CNYTVNews.com that several back office staffers were notified that their positions will be eliminated within the next few weeks.

The tipsters, who requested to remain anonymous, provided very similar information: Nexstar is allegedly eliminating all positions in the accounting, human resources and traffic (the commercial-scheduling kind, not the highway tie-up kind).  Although these departments already handled duties for WSYR-TV and a handful of other co-owned stations in surrounding markets like Binghamton, Elmira and Watertown, it appears these functions will be handled by an even more-centralized location elsewhere within Nexstar.

In addition to the three departments, our sources concur that two top-level managers -- who oversee various aspects of WSYR-TV and the aforementioned sister stations -- are also being eliminated.  One source even had dates, with one manager's last day scheduled near the end of this month, and the rest will conclude their employment about a week into the new year.

CNYTVNews.com attempted to reach management at WSYR-TV and at Nexstar Broadcasting's corporate offices to request comment on the layoff buzz, but no responses were received as of Monday evening.  (As always, if and when we do hear back, we'll update the story accordingly.)  CNYTVNews.com is not naming the specific managers referenced in the previous paragraph due to the lack of confirmation, and due to the fact these two individuals work off-air, outside of the public spotlight.

A Nexstar press release announcing that the sale has been finalized was posted on Nexstar's website late on Monday afternoon, but staffing changes were not mentioned in the announcement.  In addition to WSYR-TV, the $225.5 million deal includes sister stations WIVT (ABC) and WBGH-CA (NBC) in Binghamton, WETM (NBC) in Elmira, WWTI (ABC) in Watertown, and five other stations in Utah and Tennessee.   The Nexstar corporate website also now lists WSYR-TV among its holdings, which was not the case over the weekend.

Tonight's 90-minute early evening newscast on NewsChannel 9 ended with a full-screen Nexstar logo, as seen pictured in this story.  Previously, newscast credits ended with a "lower-third" graphic that included the NewsChannel 9 logo and a copyright notice for Newport Television LLC.

Our sincere thanks to the readers who shared their knowledge with us for this story, and our sympathies to those who received termination notices today.  We're here to tell the stories of broadcasting in Central New York, and much of that is thanks to your input.  Anytime you have news to share about local radio or TV, you can reach us in confidence at cnyradio@cnyradio.com or via the Contact Form (also accessible at the top of the page).  All requests for anonymity are honored with the utmost regard... and if you use the Contact Form, there are spaces for your name or email address, but you can leave them blank if you wish.

5 comments on “UPDATE: More Layoffs from Nexstar at NewsChannel 9”